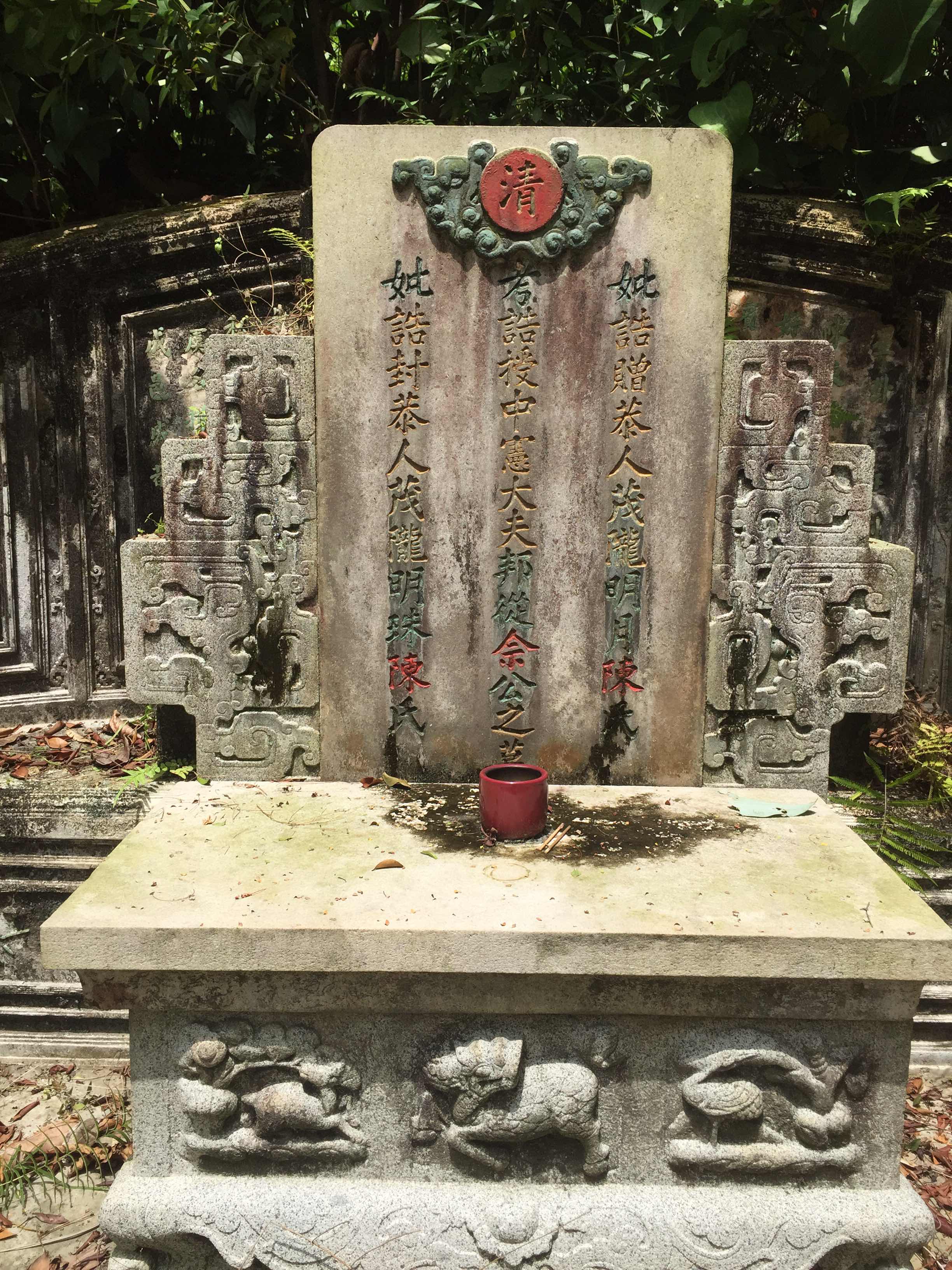 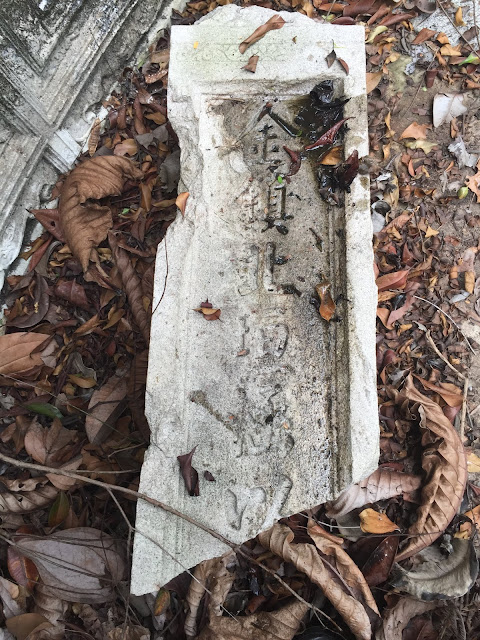 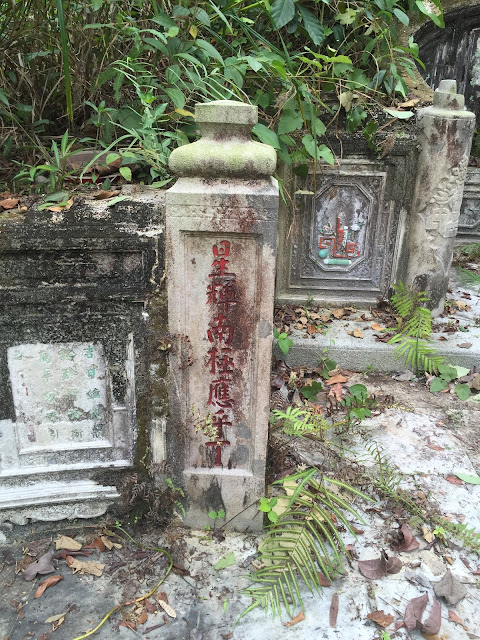 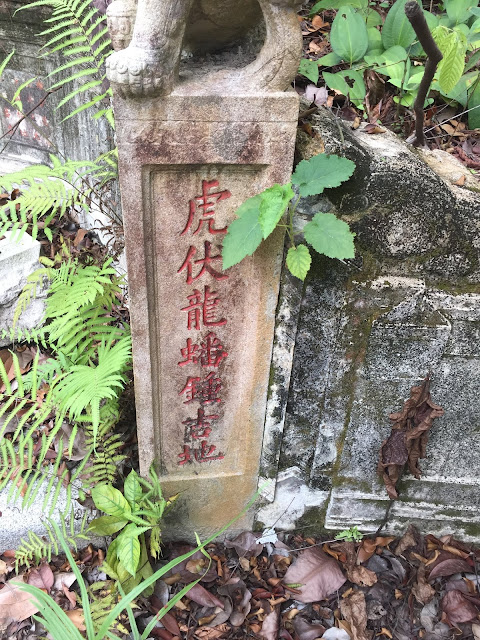 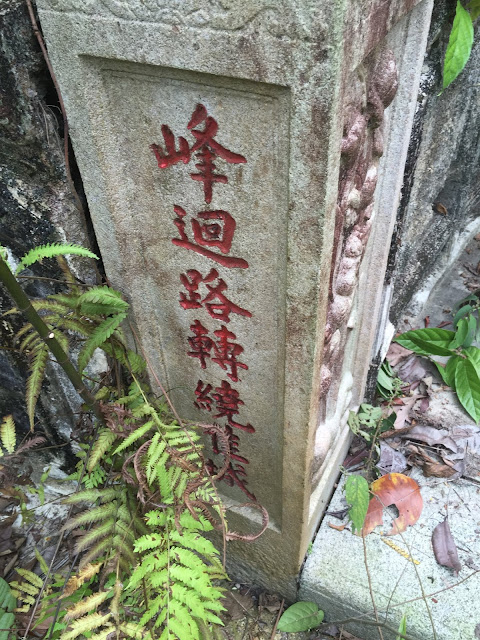 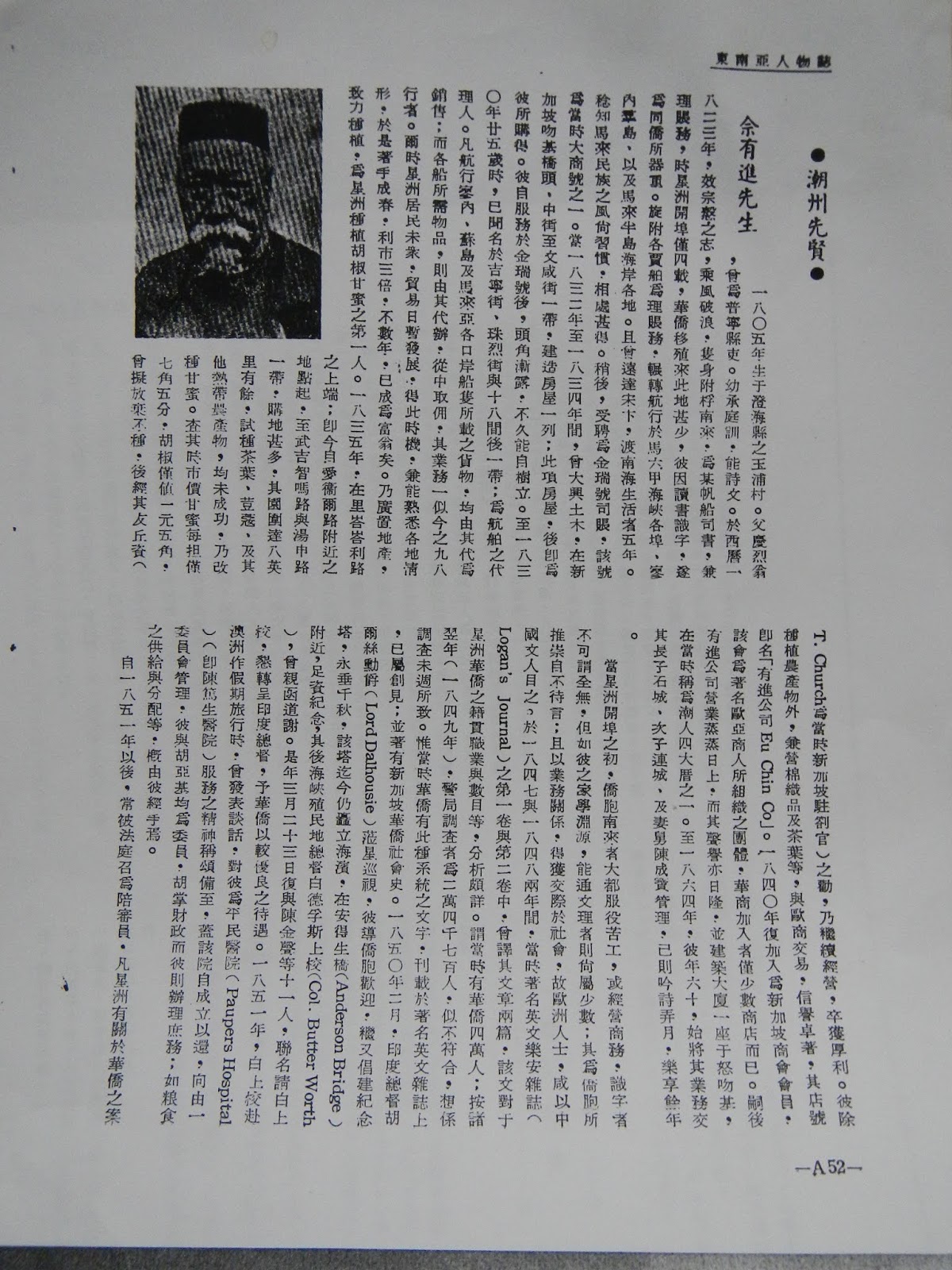 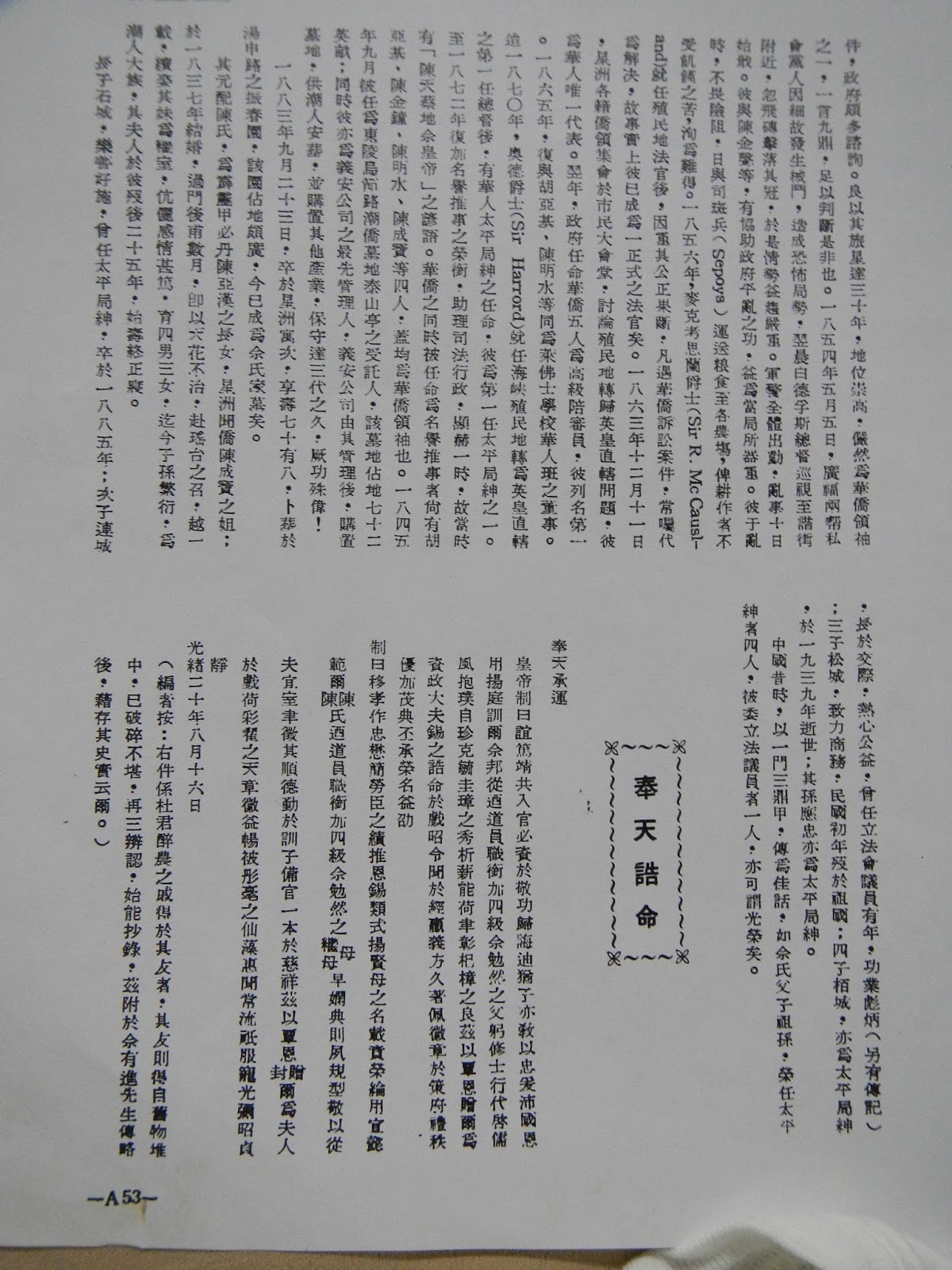 Buried at Chin Choon Plantation in Thomson Road, which is their family burial ground
His first wife was the eldest daughter of Perak Kapitan Tan Ah Hun, sister of Tan Seng Poh,
they married in 1937, unfortunately, she passed away of smallpox just a few months after marriage.
After a year, he married her younger sister,  they have 4 sons and 3 daughters.

On Saturday the body of the late Seah Eu Chin was taken from the family residence in North Boat Quay, where it had been laying in state for some days, and conveyed to its last resting place in the deceased's plantation on Thomson Road, about three miles from town.  The Chinese more than any other nation attach great importance to the due celebration of funeral rites and in the present case, the deceased being probably the oldest, wealthiest and most respected Chinaman in the place, the funeral procession was large, and its in its way magnificent.  The procession proper which was upwards of a mile in length, proceeded by North Bridge Road, Middle Road, Selegie Road and Thomson Road to the place of sepulture.
It was composed of the servants, employees, friends and relations of the deceased, besides representatives from the various Chinese societies and kongsees.  These last marched in companies, each of which wore a different uniform, and carried bright coloured banners inscribed with Chinese characters.  There were also a great many musicians , Chinese, Malay and Kling who  rent the air with their discordant music.  The only exception was the Johore Band, who played the Death March from Saul very well indeed.

The coffin which was near the end of the procession, was enclosed in a sort of catafalque or litter or great size and weight, glittering with gold ornaments, which was borne on the shoulders of thirty or forty men who were frequently changed.  Immediately after the coffin walked the sons and other relatives of the deceased clad in sackcloth and a number of friends, among whom were H H the Maharajah of Johore, and Mr Tso Ping Lung, the Chinese Consul.  A number of priests, with shaven crowns, and dressed in richly embroidered robes also attended, followed by coolies bearing various shrines and other religious emblems.  The effect of the whole was very curious and interesting, and gave a gay and cheerful aspect to the ceremony quite different from the sad appearance of an English funeral.  After the procession proper came a string of carriages containing the friends of the deceased, including many Europeans.

On arriving at the plantation, a piece of white cloth about two yards long and half a yard wide was given to each Chinaman, and a pair of black gloves and a piece of black crape were given to each European. The catafalque was then deposited near the grave and taken to pieces, leaving the  coffin exposed to view.  The coffin was of a cylindrical shape, but tapering a little from the head to the foot and seemed to be of great solidity.  The interment did not take place at once but was delayed til 7 pm, which had been fixed by the priests as the most auspicious hour for that purpose.
Meantime the guests separated for the refreshment. At the foot of the rising ground on which the grave is situated, a spacious and lofty attap shed, about 200 feet and 50 wide, had been erected, where the humbler classes of the Chinese obtained shelter and refreshment without stint.    The other guests were entertained at Echoon, the bungalow of the the deceased, a short distance from the plantation

The deceased, who was upwards of 80 years of age, was one of the first settlers in Singapore. He was for many years at the head of the Gambier and Pepper trade, in which he amassed a large fortune.  He had great influence among his poorer countrymen, which he always exerted in the cause of law and order.  He has left a widow, four sons and several daughters to mourn his loss. One of the sons is the Hon'ble Seah Liang Seah, M .L. C.

The widow of the late Mr Seah Eu Chin died this morning at the ripe age of 80 years. In the early days of this Colony, she came to Singapore with her father who was the Captain China of Perak. She married Mr Eu Chin, the father of the  well known Singapore residents Messrs Seah Liang Seah, Seah Song Seah and Seah Peck Seah. Mr Eu Chin was head of the Teochew community and very well connected.

Mrs Eu Chin retained a very vivid memory of old Singapore.  We have a good authority for saying that before she died she was perhaps the best living authority on the state of the old town. She left behind a very large family of sons and one daughter, and many grandchildren to mourn her loss

The business hitherlo carried on by the undersigned in partnership with Seah Liang Seah, Seah Song Seah, Seah Peck Seah and Seah Eng Kim at No 157-1 Thomson Road, as pineapple manufacturers under the Chop Chin Choon has been dissolved by mutual consent as from the 10th day of July 1900.  All debts due to and by the said chop Chin Choon will be received by the undersigned who wil continue to carry on the said business alone under the same chop 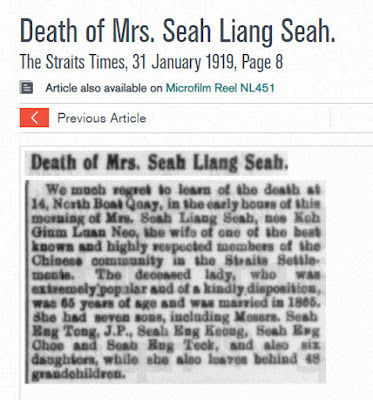 The remains of the late Mrs Seah Liang Seah will be removed for
interment on Friday the 9th inst. The funeral cortege will leave
No 14 North Boat Quay at 10.30 am sharp for Thomson Road Seah Eu Chin's
family burial ground

Friends and relatives of Mr Seah Eng Choe are informed that the funeral
of his beloved wife, the late Ng Hiang Quee will take place on Monday August 11 at 1 pm
when the cortege will leave Bendemeer for the Family Burial Ground at Thomson Road

The funeral of the late Mr Seah Liang Seah will take place on
Sunday December 23. The cortege will leave No 14, North Boat Quay
at 11 am sharp for  Thomson Road Family Burial Ground ( 3 1/4 milestone)

The funeral of Mr Seah Liang Seah will take place on Sunday and as is customary a procession extending over a mile and a half will commence at 14 North Boat QUay at 11 am. The cortege will be taken along North Bridge Road, High Streeet, Hill Street, Victoria Street, Middle Road, Prinsep Street, Albert Street, Selegie  Road, Bukit Timah Road, Kampong Java Road and thence along Thompson Road to the family burial ground at the 3 1/4 mile stone. 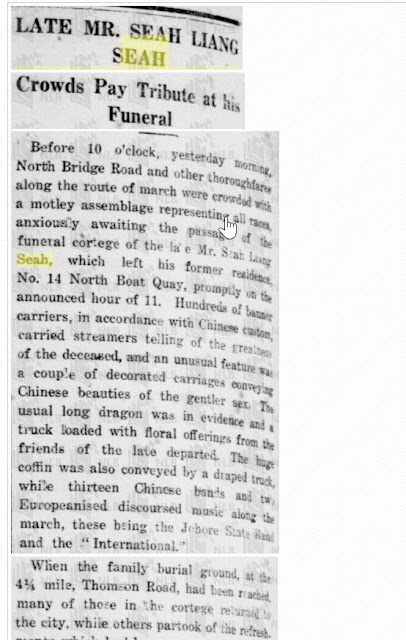 Suggested that the Family Burial Ground at Chin Choon Plantation at Thomson Road should not take in any further burials as such burials would only tend to decrease value of the plantation and cause lesser revenue to be collected by the trustees. The graves, according to Chinese rites would take up a lot space. 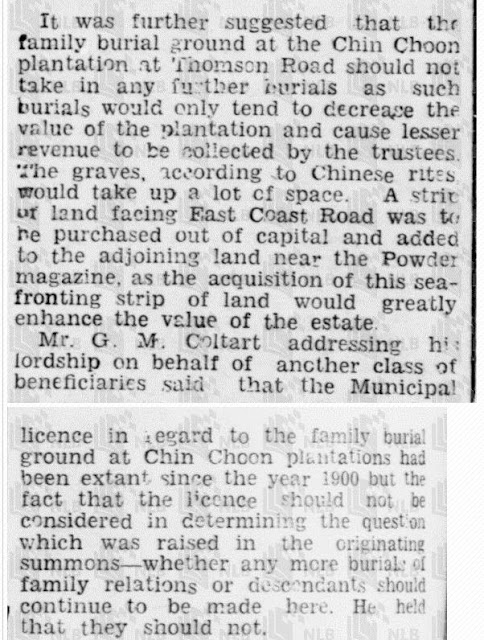 The Funeral of the late Mr Seah Eng Tong JP will take place on Sunday
14 July. Cortege will leave his residence No 156, Pasir Panjang Road
(Via Alexandra Road) at 11 am sharp for the Family Burial Ground at 4th Milestone Thomson Road, Singapore 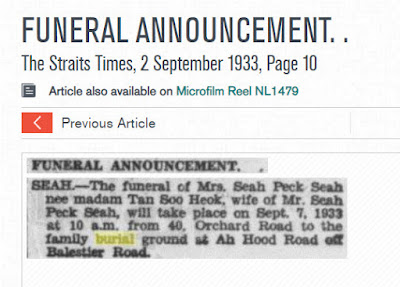 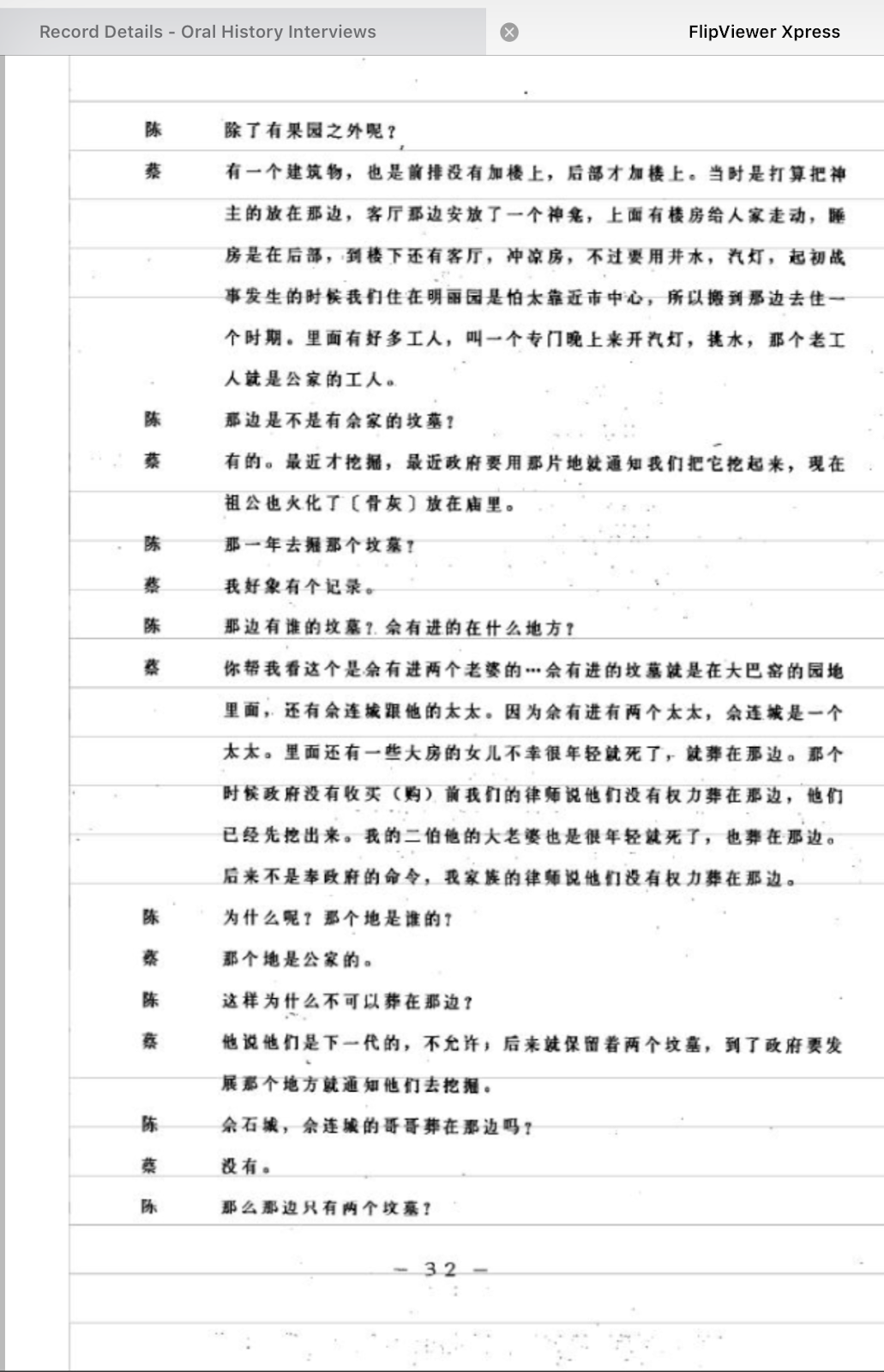 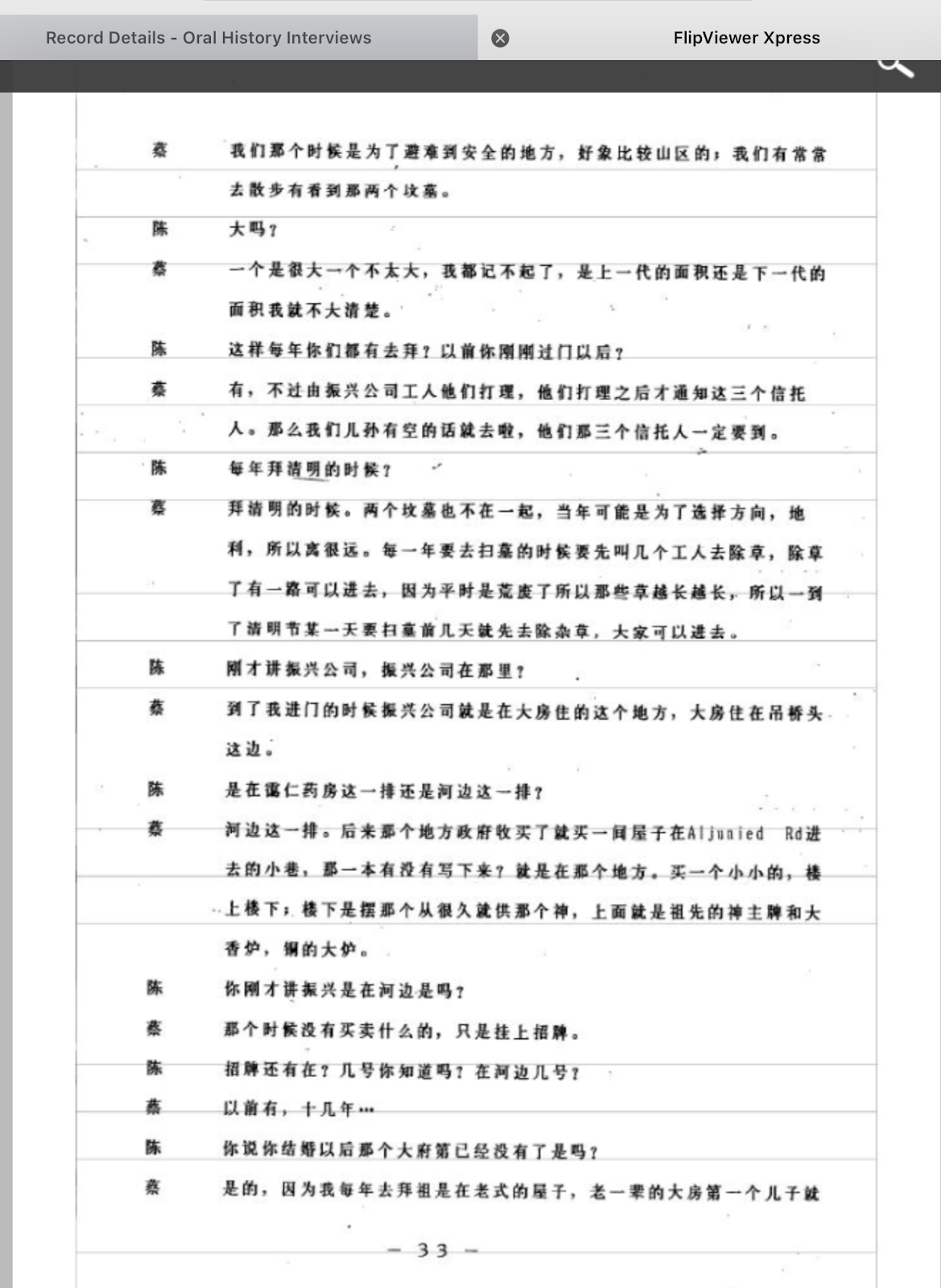 Mdm Chua mentioned that Seah Eu Chin tomb is in Chin Hin plantation,  also his wife.  She also mention Liang Seah and his wife,  and also other second generation wives.

However, their family lawyer decided that second generation should not be buried in the family burial ground, and all has been dug up.  Finally the land was acquired by the govt, even Liang Seah tomb was exhumed and put in a temple.

Every year, the family along with the three trustees would conduct Qing Ming rituals for the two remaining graves

One was very big and one was smaller.  The two tombs are quite a distance apart due to fengshui reasons.

As for his first wife Tan Meng Guat, there is no mention  of her burial.   Since she died in the 1837/38,  she might be buried in another burial ground.

The problem with Teochew grave is that both husband and wife/wives names are listed on the same  tomb,  and if there is no other inscriptions to identify the tomb,  one would not be sure whether it is the husband or wife who is buried there

In 2015,  there is a facebook post that there is a letter from the Seah family in 1940 wanting to claim for compensation from the govt for the wrong removal of a certain Seah Eu Chin grave from a plot of land belonging to Seah Eu Chin in Alexandra Road.

The burial of Seah Eu Chin in his Thomson Road plantation has been described in great detail including the procession from his house to Grave Hill, and the burial details.
So are the burials of his wife  Meng Choo and his son Seah Liang Seah and Mrs Seah Liang Seah.

So who is this mysterious Seah tomb that is said to be wrongly removed ?

I believe if it is not an empty unused tomb of Seah Eu Chin (could be there for fengshui reasons, or Eu Chin decided to be buried in Grave Hill instead because of better fengshui there) or it could be that of his first wife Tan Meng Guat.  If there are no other inscriptions,  one would associate that wife tomb to be that of Seah Eu Chin because of the husband name commonly inscribed together with the wife in Teochew tombs