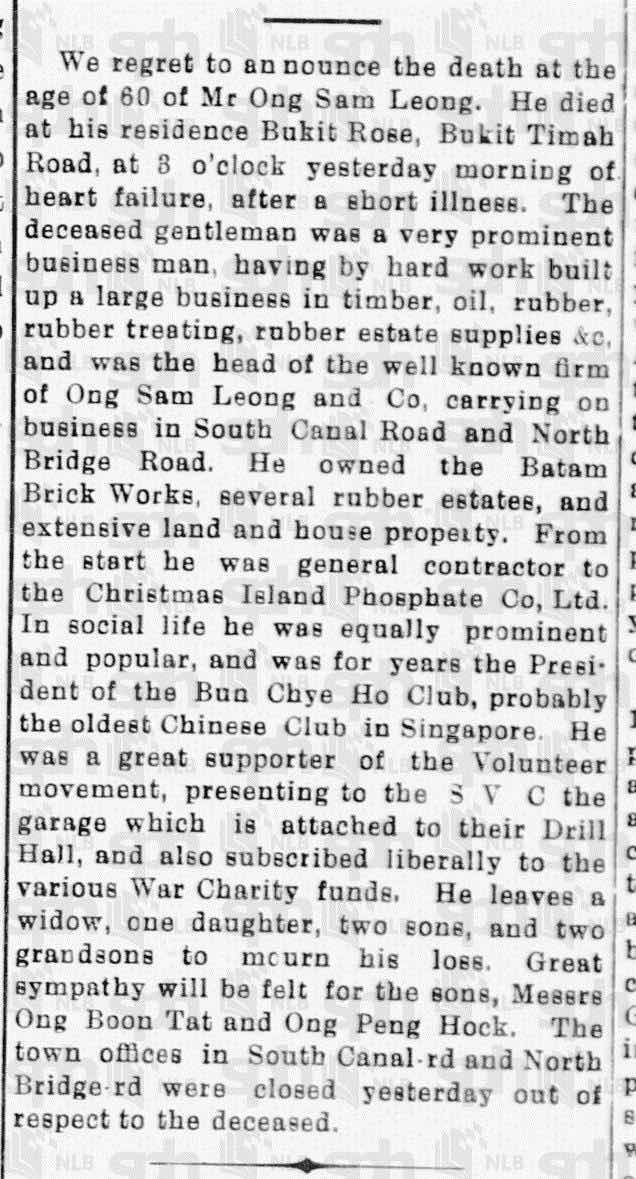 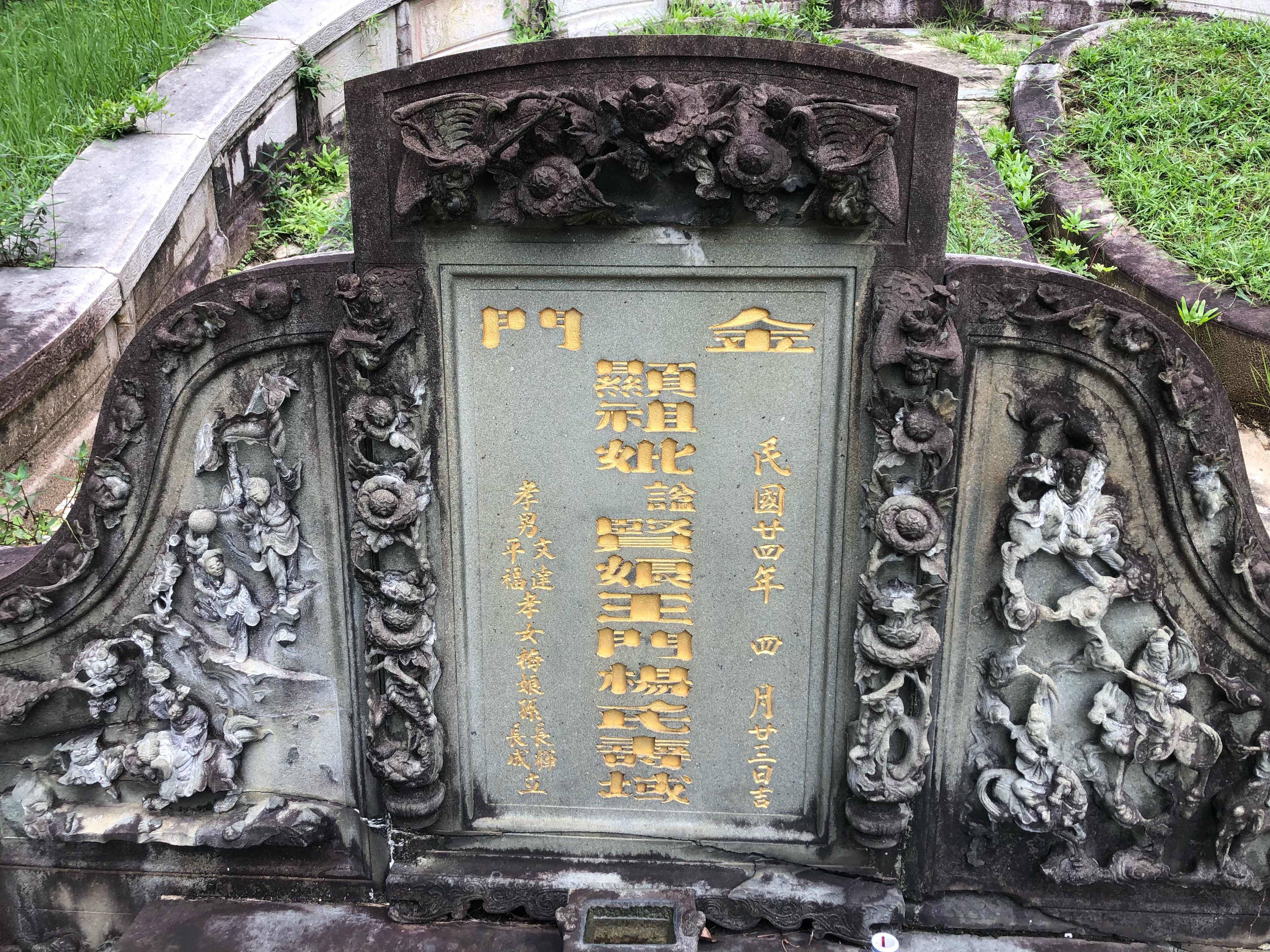 Mr Ong Sam Leong was born in Singapore in 1857, and at the age of 21 started a small commission agent’s business on his own account.

His early land transactions turned out profitably, and he became interested in timber concessions in Pahang and Kemaman. In 1899 he secured the contract as universal provider to the Christmas Island Phosphate Co Ltd at that island under the name of Ong Sam Leong & Co, and the firm still holds the monopoly of the contract with the Company. He also owned the well-known Batam Brickworks and held large interests in numerous sawmills in Singapore. As part of his business activities, he engaged in house-building and rubber-planting, and at his death on 7th February 1918 his estate consisted of substantial landed properties and rubber estates, both local and outside the Colony. He was a popular member of several old and respectable Chinese clubs in Singapore and for many years was president of ‘Ban Chye Ho’ Club. He was keenly interested in the patriotic movement of the Straits Chinese community during the Great War and subscribed liberally to all local funds necessitated by that War. He further erected, at his own expense, the garage at the SVC Drill Hall, for the use of the Corps motor lorry, as an expression of his appreciation of the valuable work which was then being done, at a number of outposts, for the defence of the Settlement by volunteers belonging to the various units. He continued to be a very busy and hard-working man till the end of his days, and the only relaxations he gave himself were motoring and sea-trips. He started life handicapped with a meagre education, but his perseverance and business acumen helped him to build up his own fortune, and before his death he had erected a fine house in Bukit Timah Road known as ‘Bukit Rose’, in which he entertained his friends on a lavish scale. His widow belongs to an old ‘Yeo’ family, several members of which were of the Christian faith;  an aunt being the first wife of the late Mr Song Hoot Kiam, and an uncle being the well-known Yeo Koon Ho (alias Toleap Young). His surviving daughter is the wife of Khoo Pek Lock, the third son of Khoo Phee Soon, at one time one of the leading shipowners and rice merchants of Singapore.

Of his two sons, the elder one, Ong Boon Tat,33 was born in Singapore in 1888 and educated at Raffles Institution, where he won the Guthrie Scholarship, which had been resuscitated after having been in abeyance for some years. At the age of 19 Mr Boon Tat commenced his business training under his father and is now a prominent man among Straits Chinese merchants of this Colony. He extended the business of Ong Sam Leong  and Co., of which he is the chief, by opening a branch house in Penang which is meeting with much success. He is a JP and a Fellow of the Royal Society for the Encouragement of Arts, Manufactures and Commerce, and is one of the group of young Straits Chinese who are taking a practical interest in public affairs, having realised the duties of citizenship which devolve more especially on the men of education and standing in our community.
The younger son, Ong Peng Hock, who also received his education at Raffles Institution, was carefully trained by his father in the timber trade, and was managing director of United Sawmills Ltd during the brief period of its existence. As a partner of Ong Sam Leong and Co. he goes on frequent visits to Penang to supervise the management of the branch business there.
—————————— 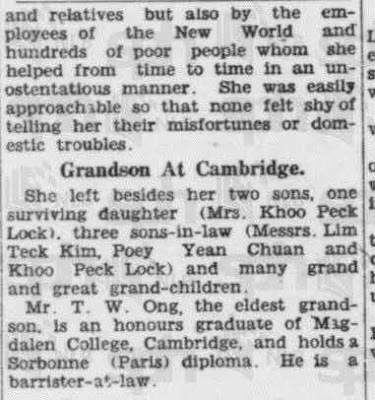 His widow belongs to an old ‘Yeo’ family, several members of which were of the Christian faith;  an aunt being the first wife of the late Mr Song Hoot Kiam, and an uncle being the well-known Yeo Koon Ho (alias Toleap Young). 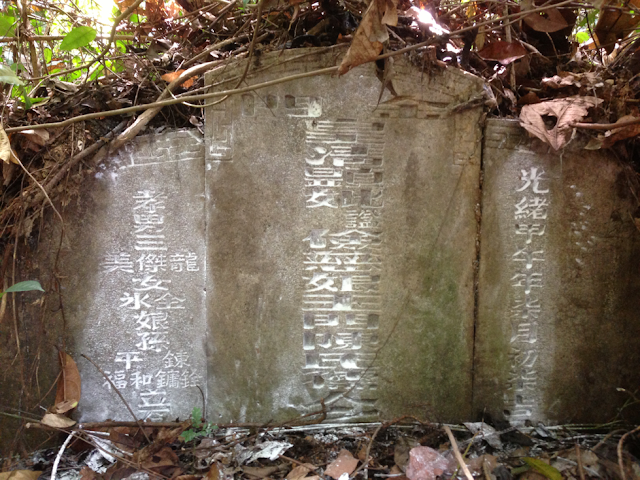 This tomb was found among a cluster of old Qing tombs relocated to the New Hang San Teng from the old Heng San Teng at Silat Road.
I believe this tomb to belong to the old Yeo Family as mentioned by Song Ong Siang.  This tomb is dated to 1836

Song Ong Siang One Hundred Years’ History of the Chinese in Singapore :

Ong Sam Leong’s widow (Yeo Hean Neo) belongs to an old ‘Yeo’ family, several members of which were of the Christian faith: an aunt (Yeo Choon Neo) being the  first wife of the late Mr Song Hoot Kiam, and an uncle being the well-known Yeo Koon Ho (alias Toleap Young). 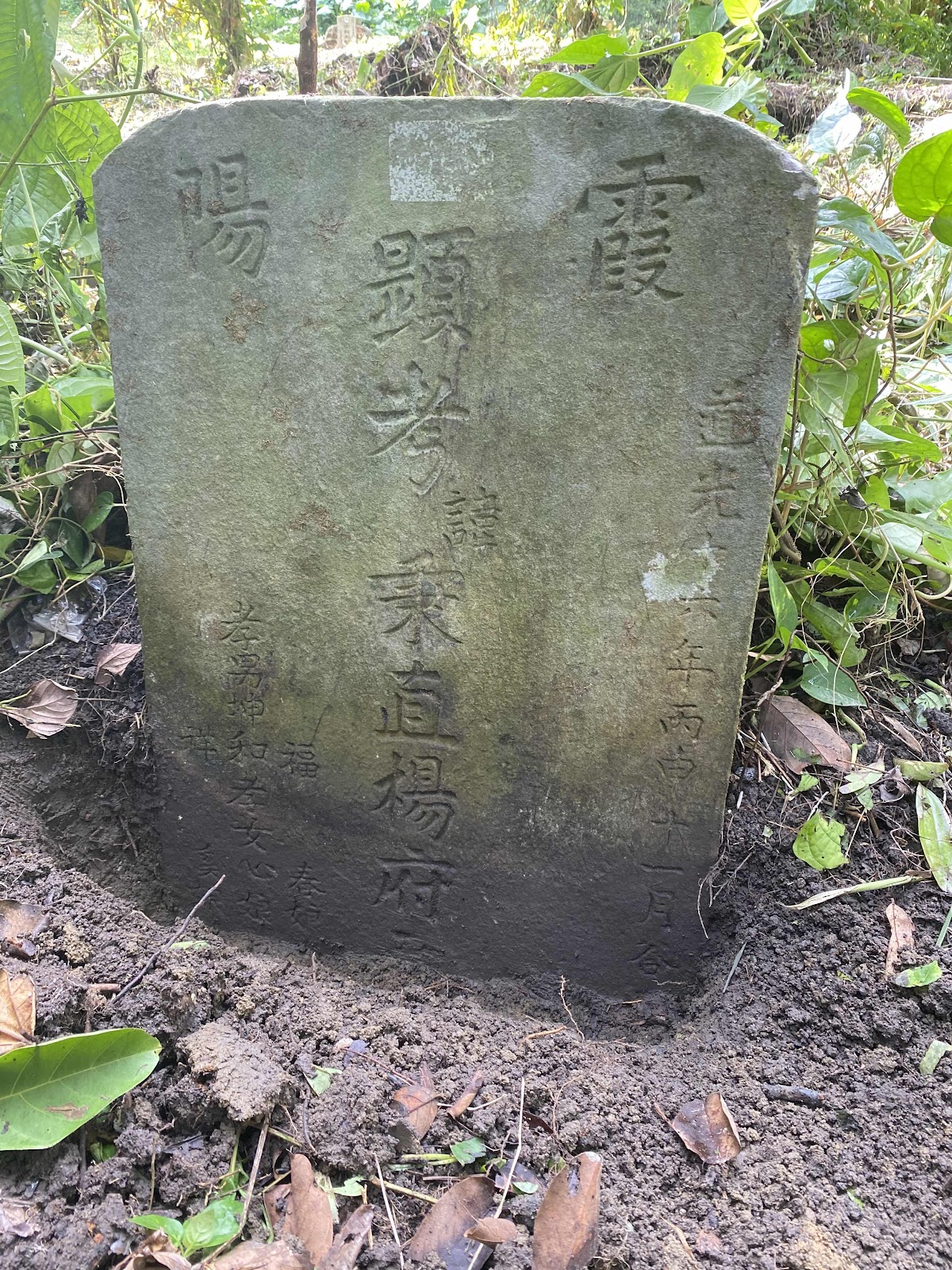 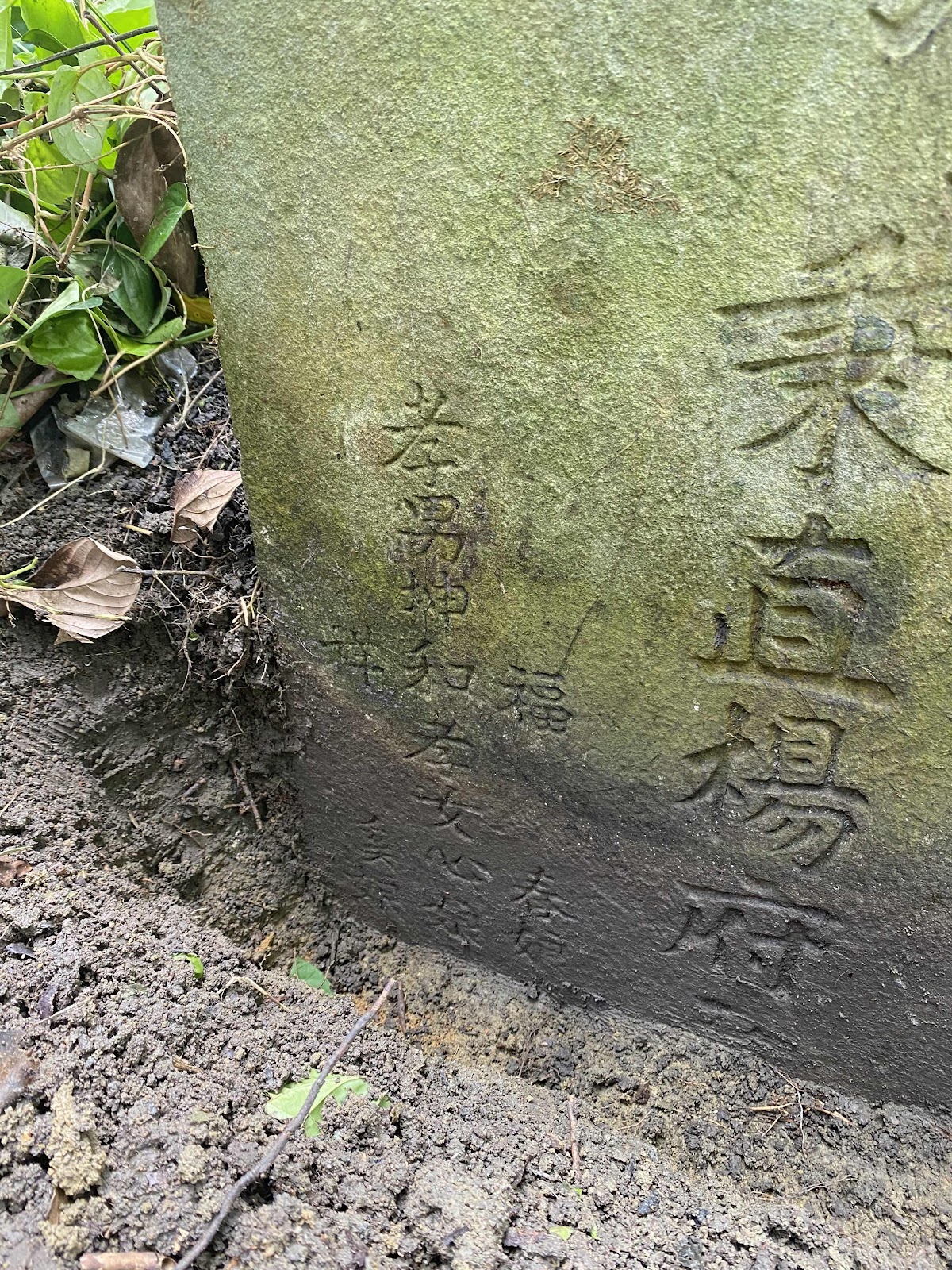 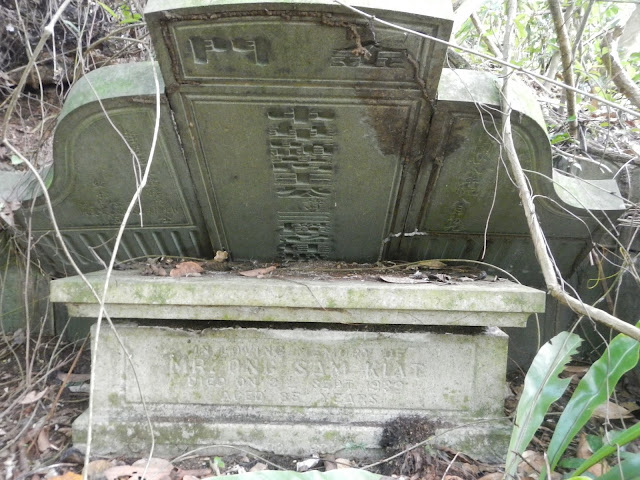 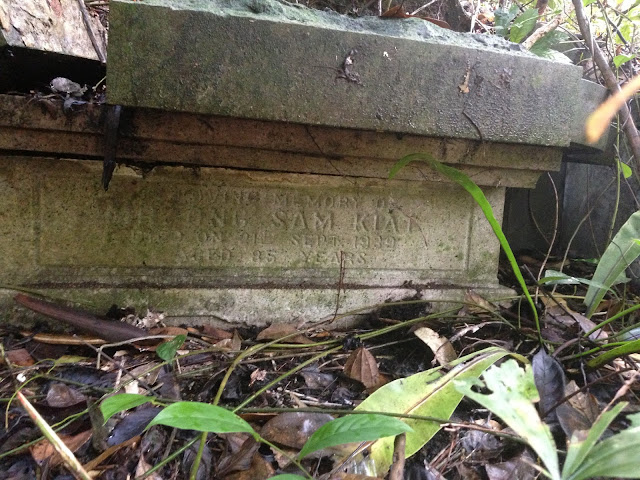 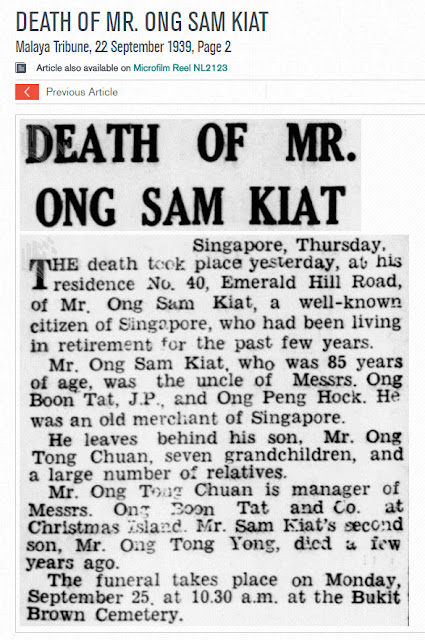 Ong Sam Kiat would be born around 1854, the eldest among the three brothers - Ong Sam Leong and Ong Sam Bee 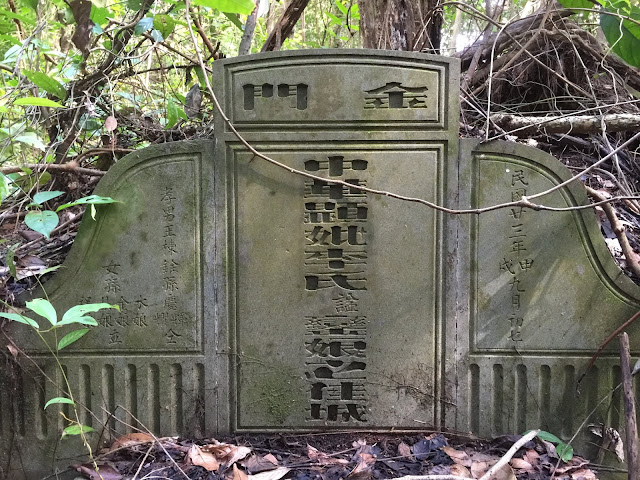 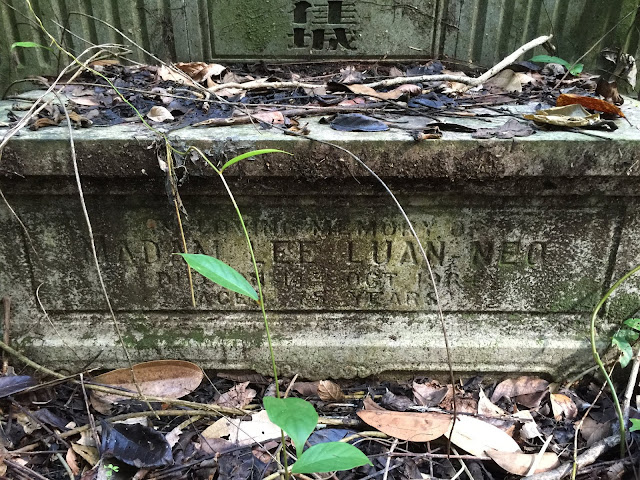 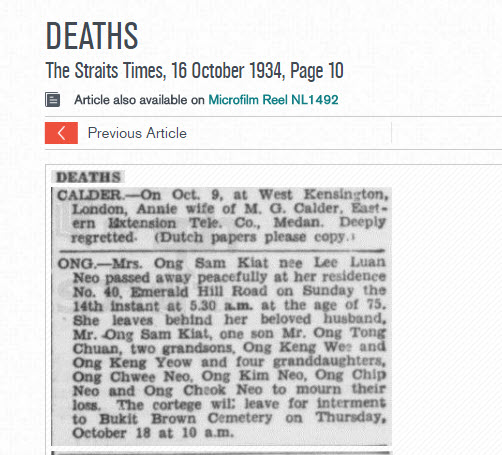 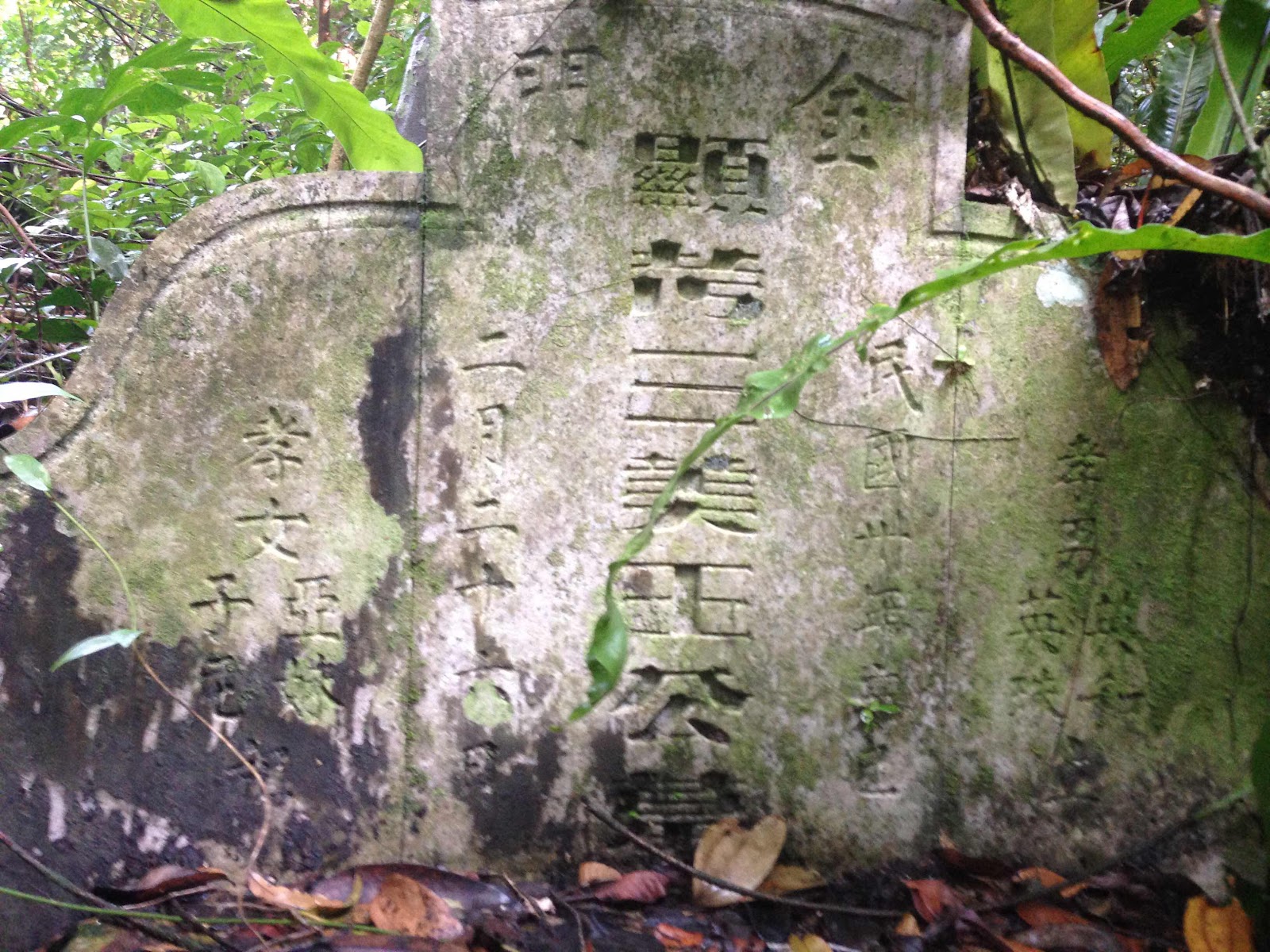 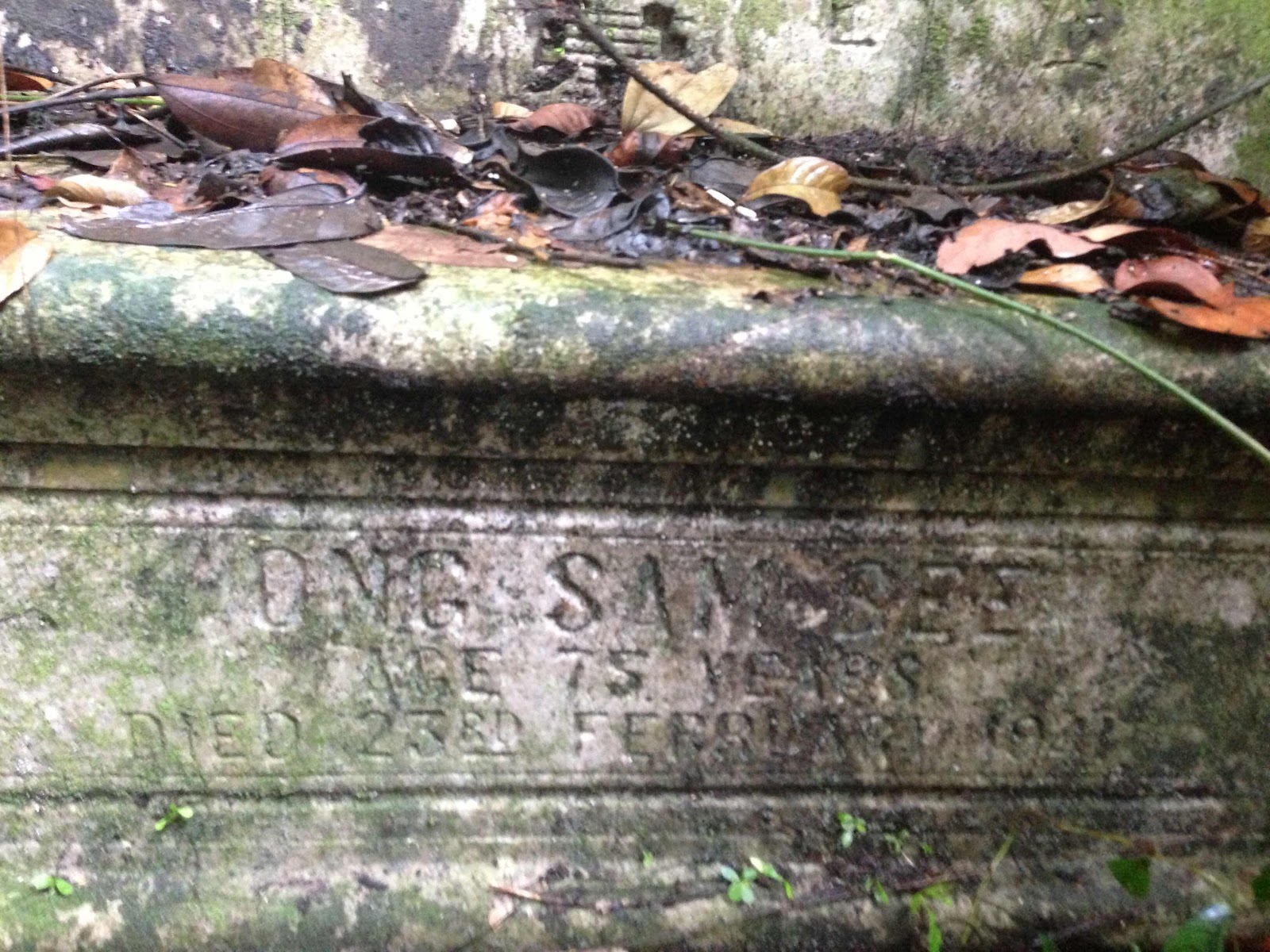 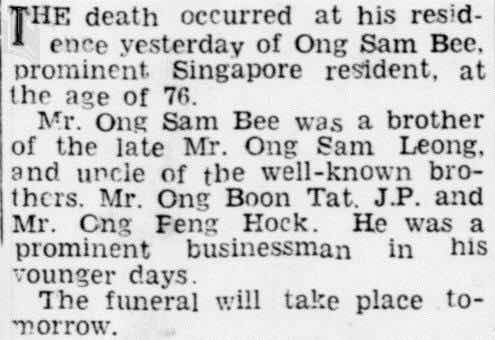 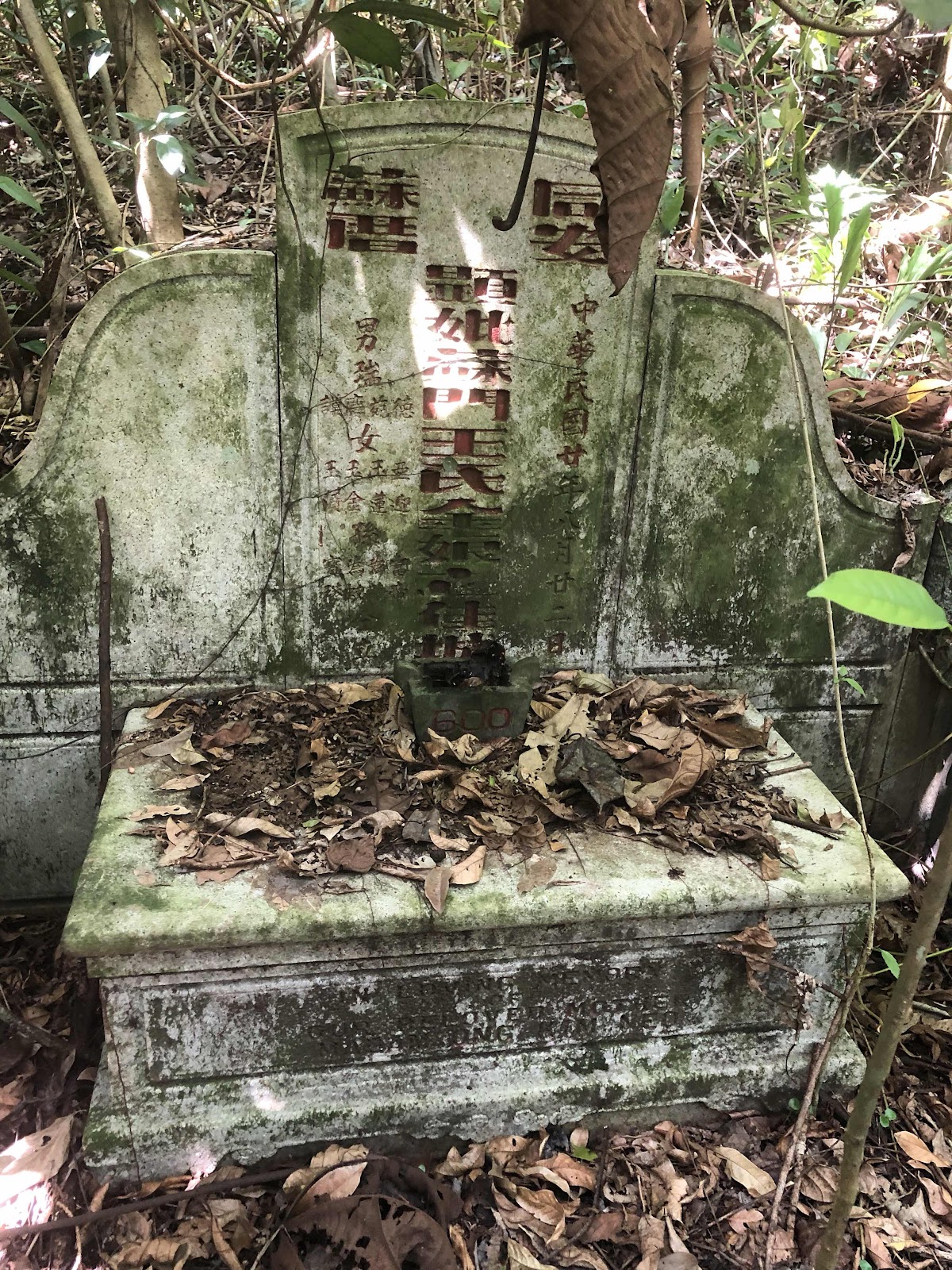 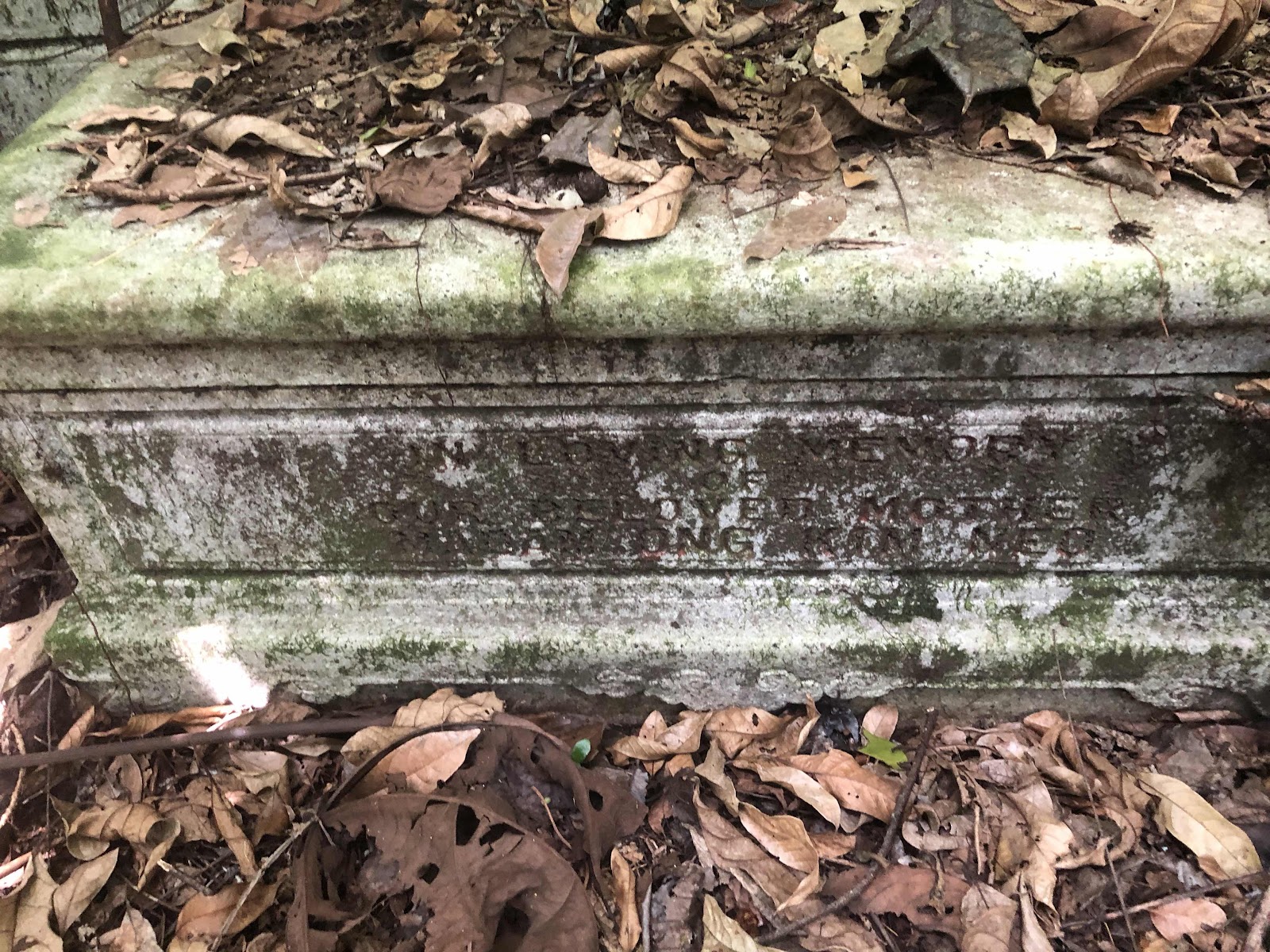 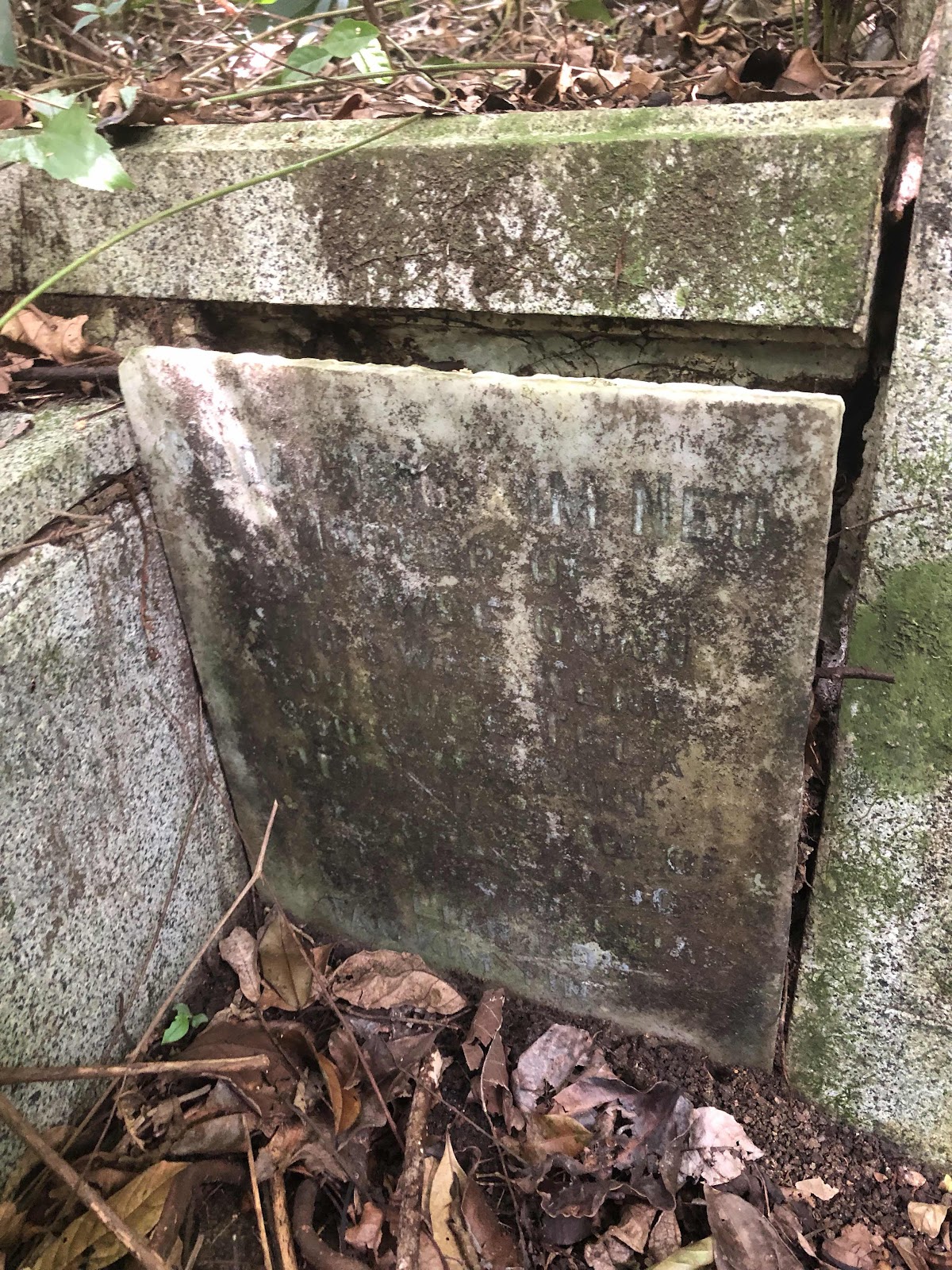 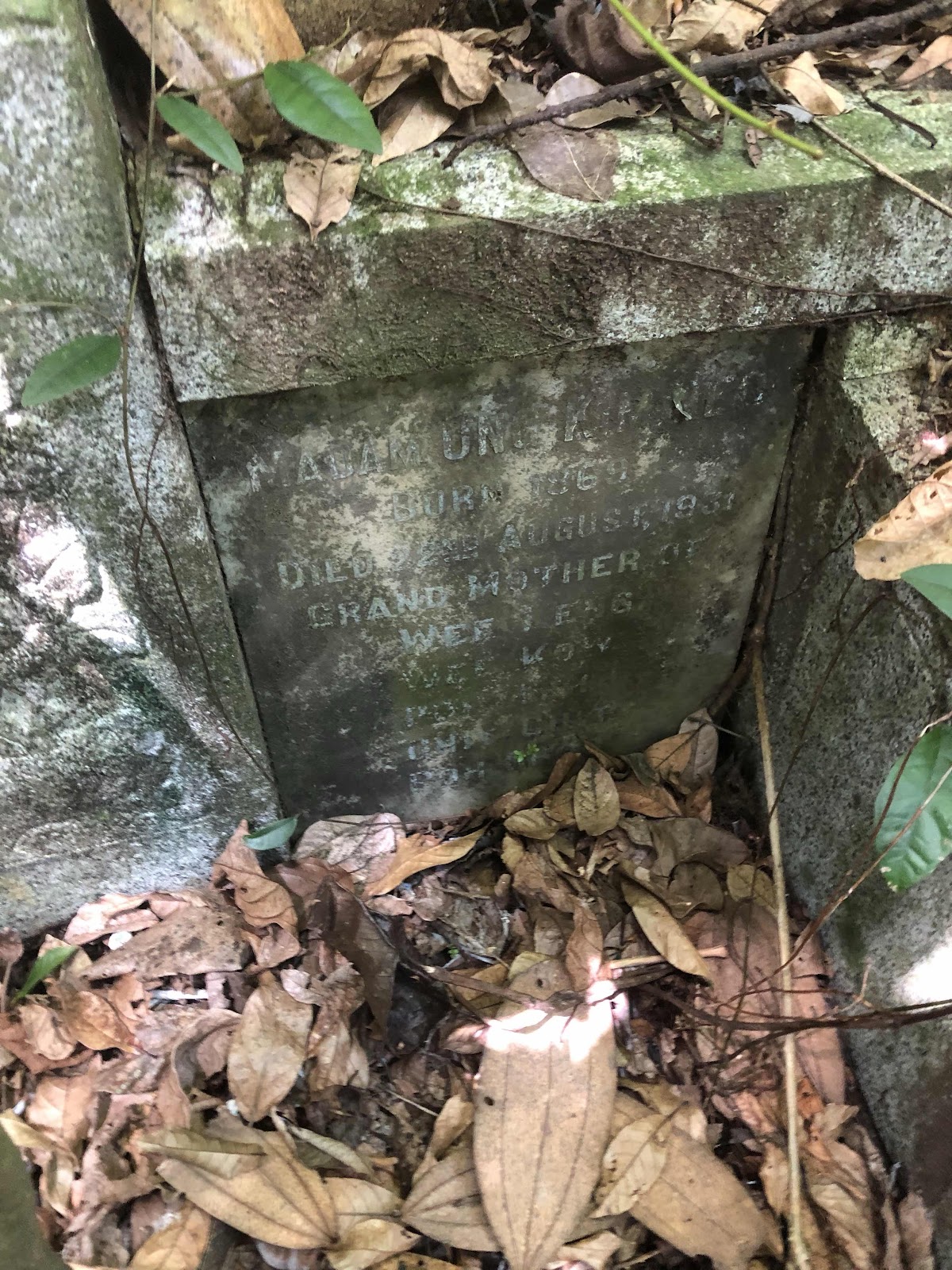 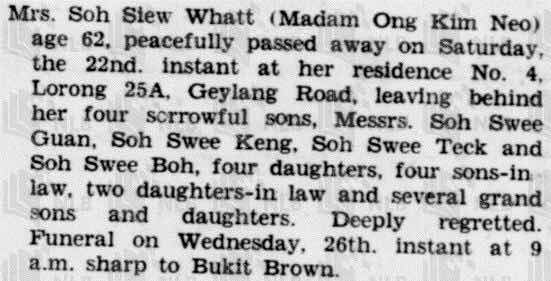 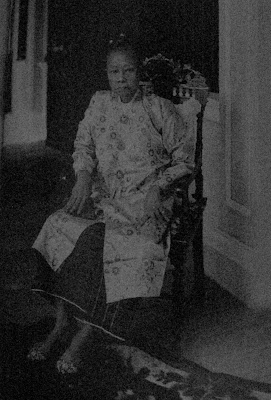 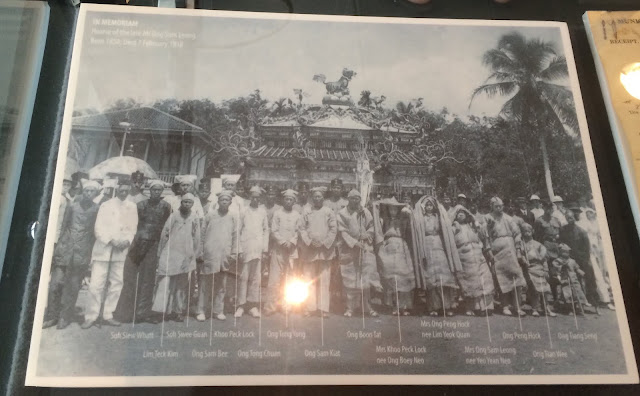 Photograph of Ong Sam Leong's family at Bukit Rose, exhibited at the Bukit Brown exhibition in July 2014 at the National Library