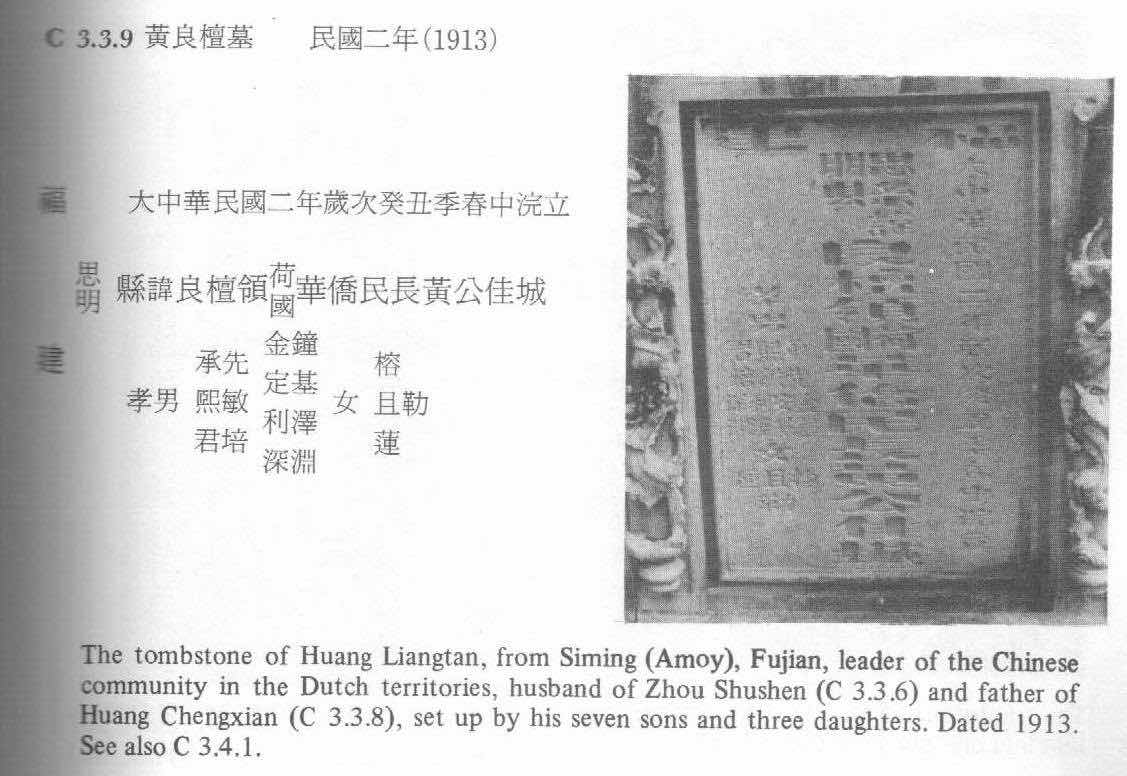 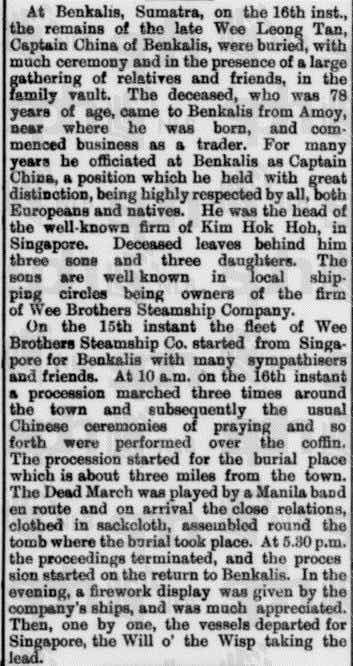 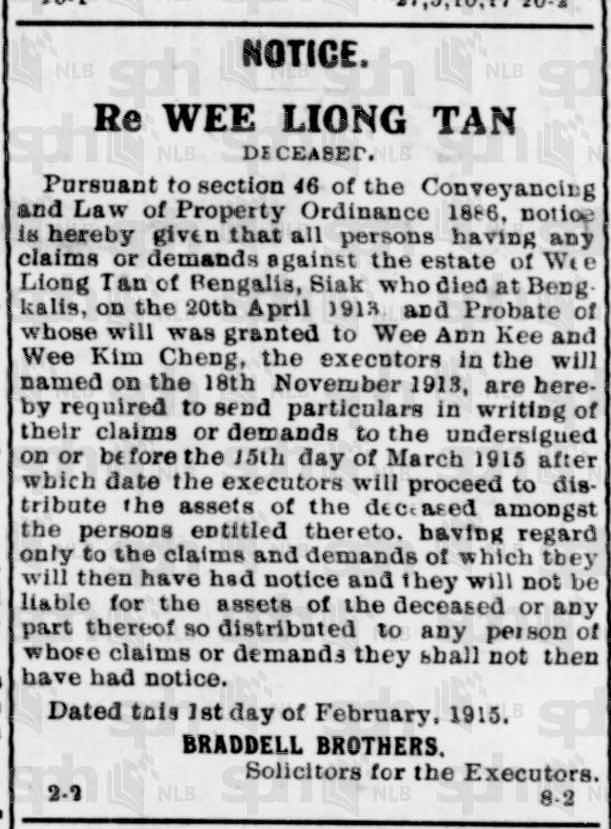 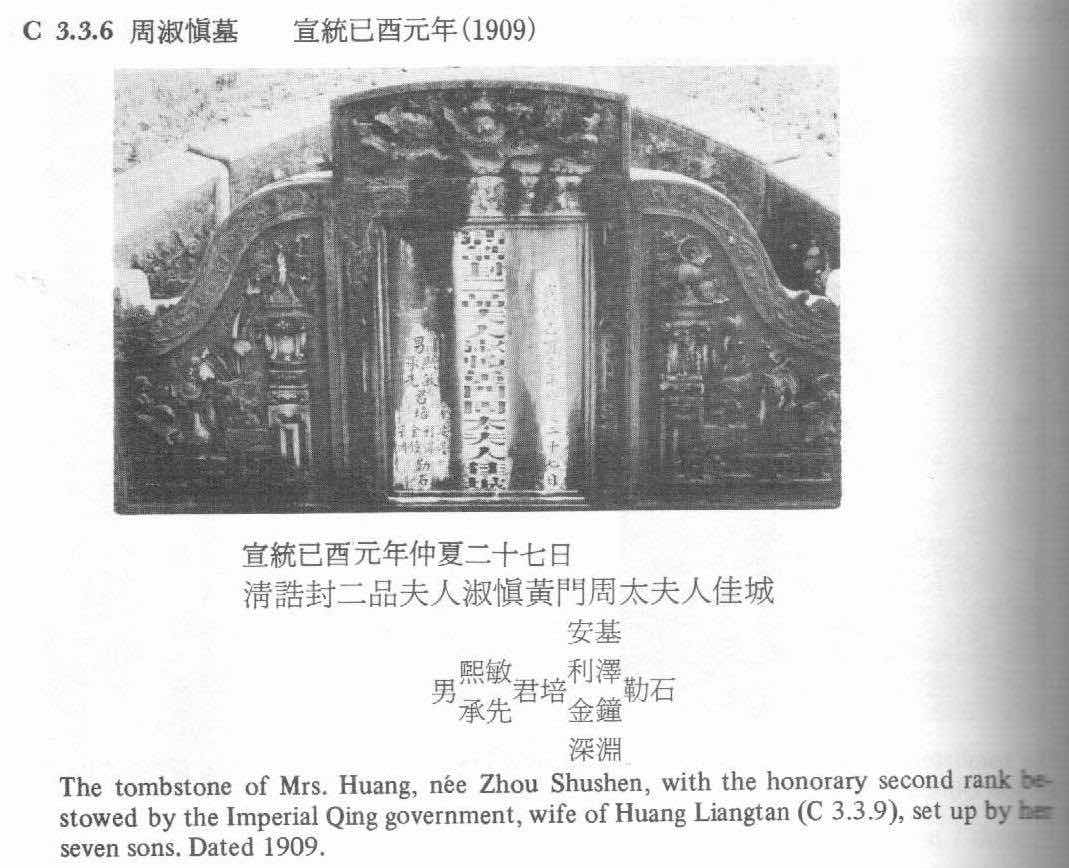 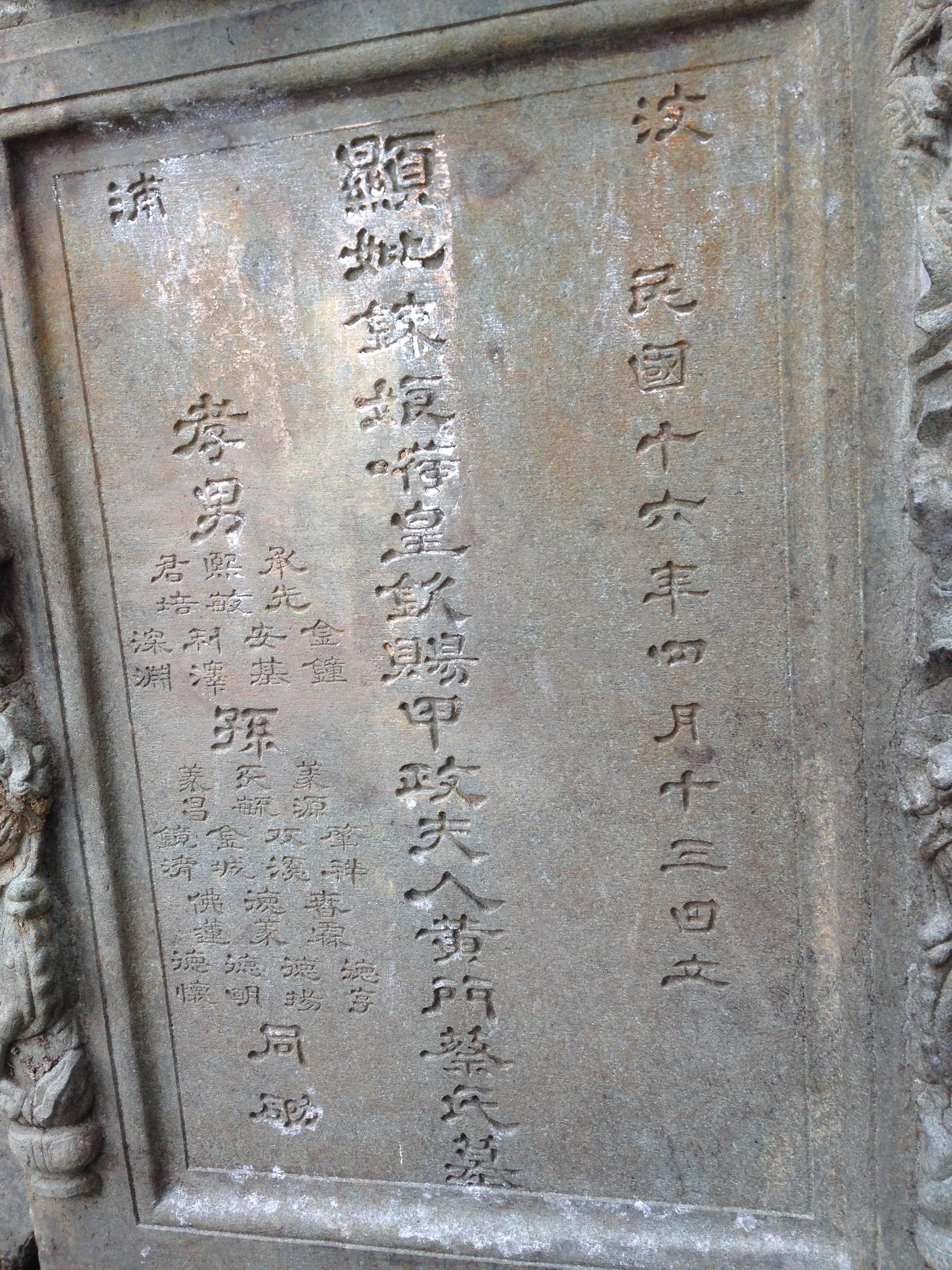 Death - on April 12, 1927 at No 28,  Stanley Street
Chua Seok Neo
Age 90 years
From Song Ong Siang One Hundred Years History of the Chinese in Singapore

The firm of Kim Hock Hoe & Co, general shipowners and commission agents, was founded in 1893 by Wee Leong Tan. At an early age Leong Tan left his home in the Amoy region and went to Benkalis, on the east coast of Sumatra, where he became the Opium Farmer

under the chop Kim Hock Lee. For his twenty-nine years service as an honorary officer of the Dutch Government, first as Captain and afterwards as Major China, he received in 1900 an Imperial Order and gold medal from Queen Wilhelmina (of Holland). His two elder sons, Wee Ann Kee and Wee Kim Cheng were his partners in chop Kim Hock Hoe, which has been converted into a limited liability company known as Kim Hock Hoe Ltd, with Mr Goh Cheng Lim as chairman of the Board of Directors, and having its registered office at Market Street and doing business as general merchants and commission agents.

The shipping business of the old firm was acquired by another company which was incorporated in 1908 under the name of Wee Brothers Steamship Co Ltd.

Mr Wee Leong Tan died in May 1913, at the age of 78, and was buried at Benkalis in the family vault. The fleet of Wee Brothers Steamship Co was placed at the disposal of sympathisers and friends from Singapore to attend the funeral, and a large crowd took advantage of a free trip to Benkalis. On the evening after the burial ceremonies, which were very imposing and elaborate, a firework display was given by the fleet, which immediately afterwards set sail for Singapore.

From Twentieth Century Impressions of British Malaya
Mr Wee Leong Tan, head of the firm of Messrs Kim Hock Hoe and Co, is one of the many enterprising Chinese who have been attached to the British and Dutch possessions in Malaya by the prospects of sharing in their commerical prosperity.

Born in China in the vicinity of Amoy, he went early in life to

Bengkalis, on the east coast of Sumatra, where he soon became the opium farmer for that part of the Dutch possessions under the chop of Kim Hock Lee. He has received

numerous honours from the Dutch Government., In 1872 he was appointed Captain China, and in 1900 received an Imperial Order and gold medal from  Queen Wilhemina. In 1902, after twenty-nine Years'!service as an honorary officer of the Dutch Govermnent, he retired with the rank of titular major. During these years his business had thrived, and he had obtained extensive interests all over the district. His

first connection with Singapore dates from 1893, when he founded the firm of Kim Hock Hoe & Co., general shipowners and commission agents at 53 - 57 Market Street. The other partners in the concern are his two sons, Messrs Wee Ann Kee and Wee Kim Cheng, the latter of whom acts as manager. Mr Wee Leong Tan has sevens sons, three of whom hold office as honorary captains and lieutenants on the east coast of Sumatra. 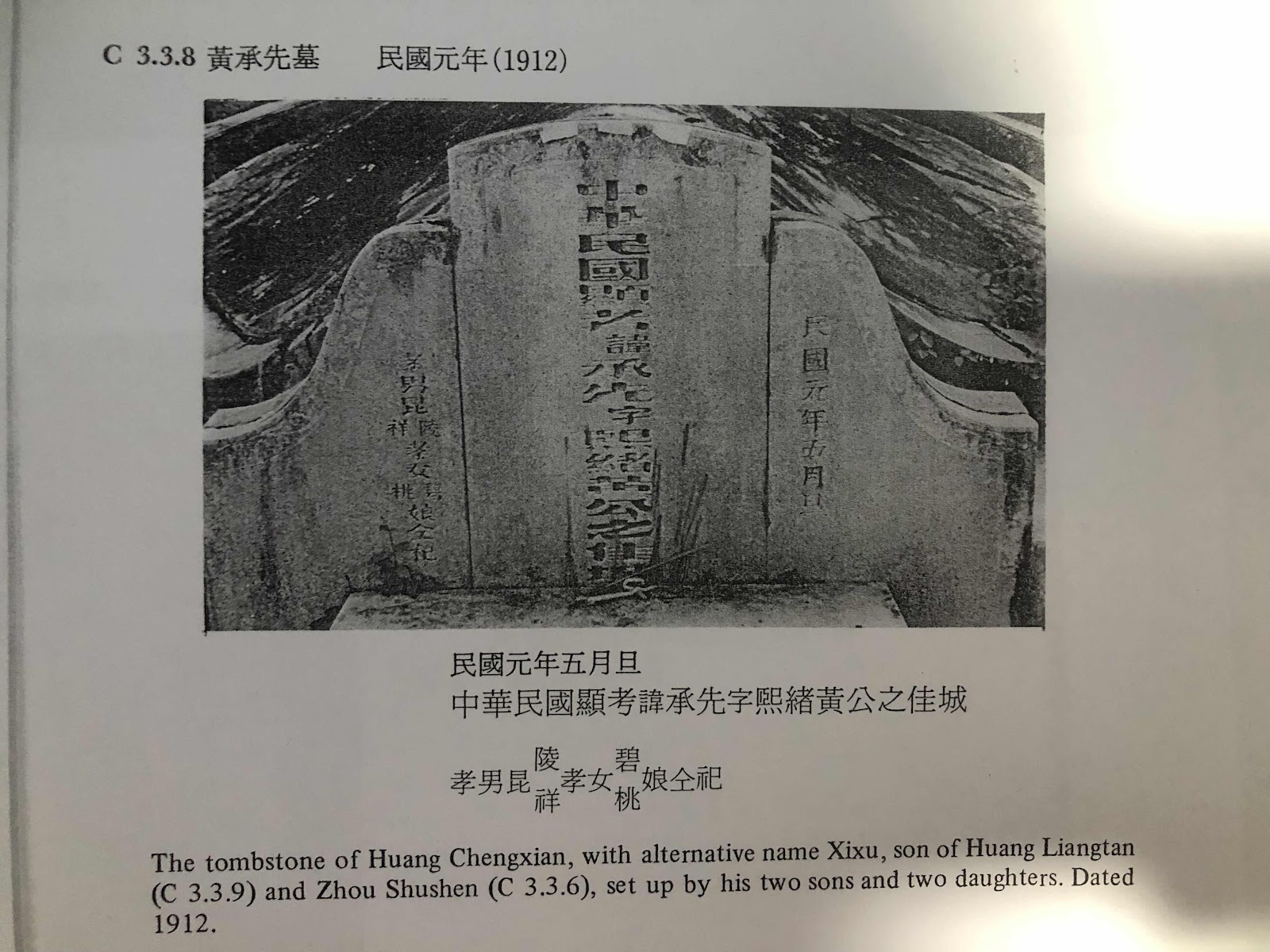 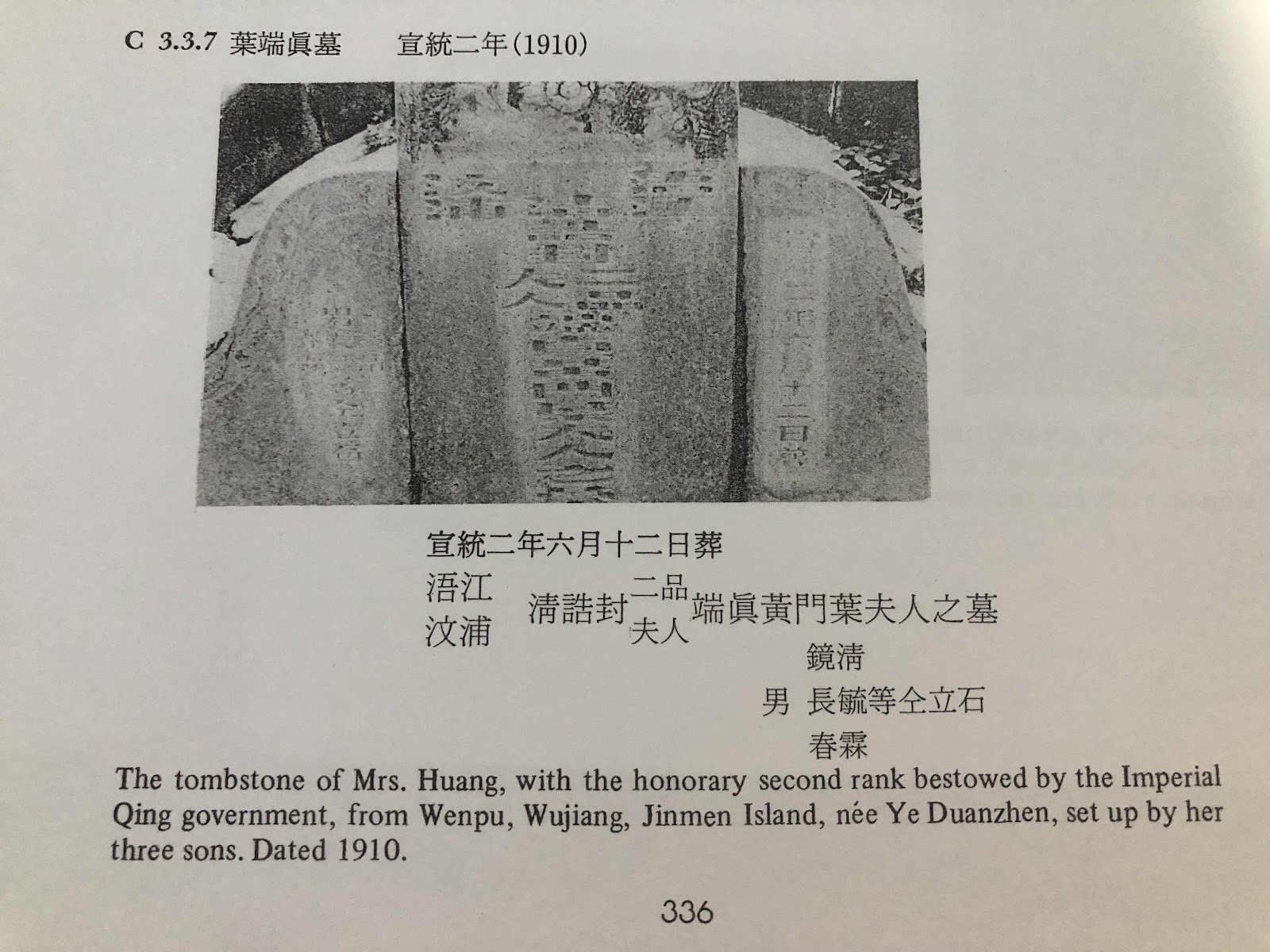 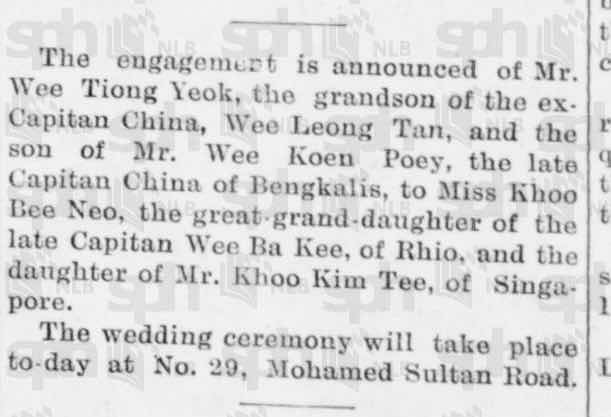 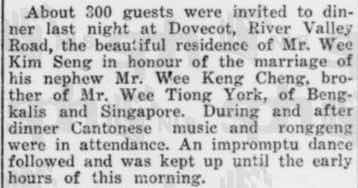 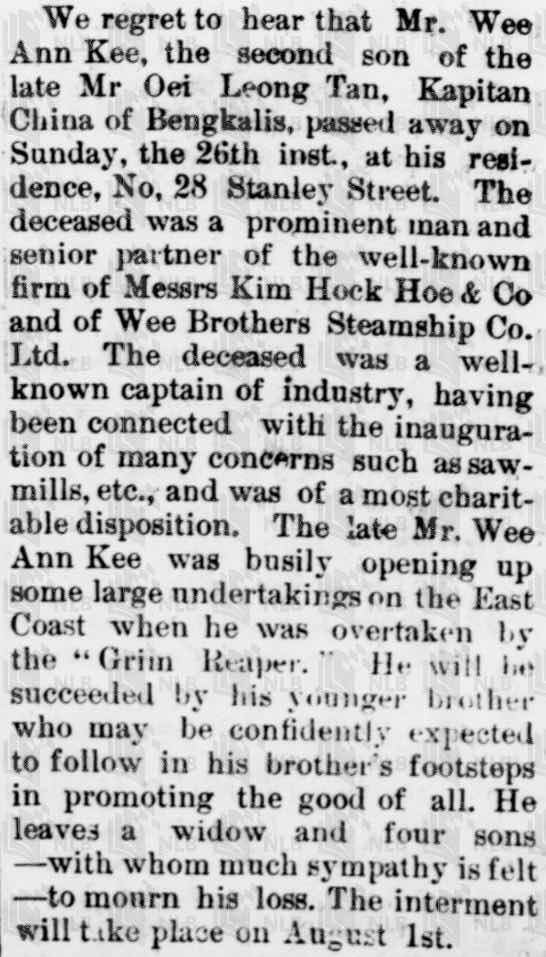 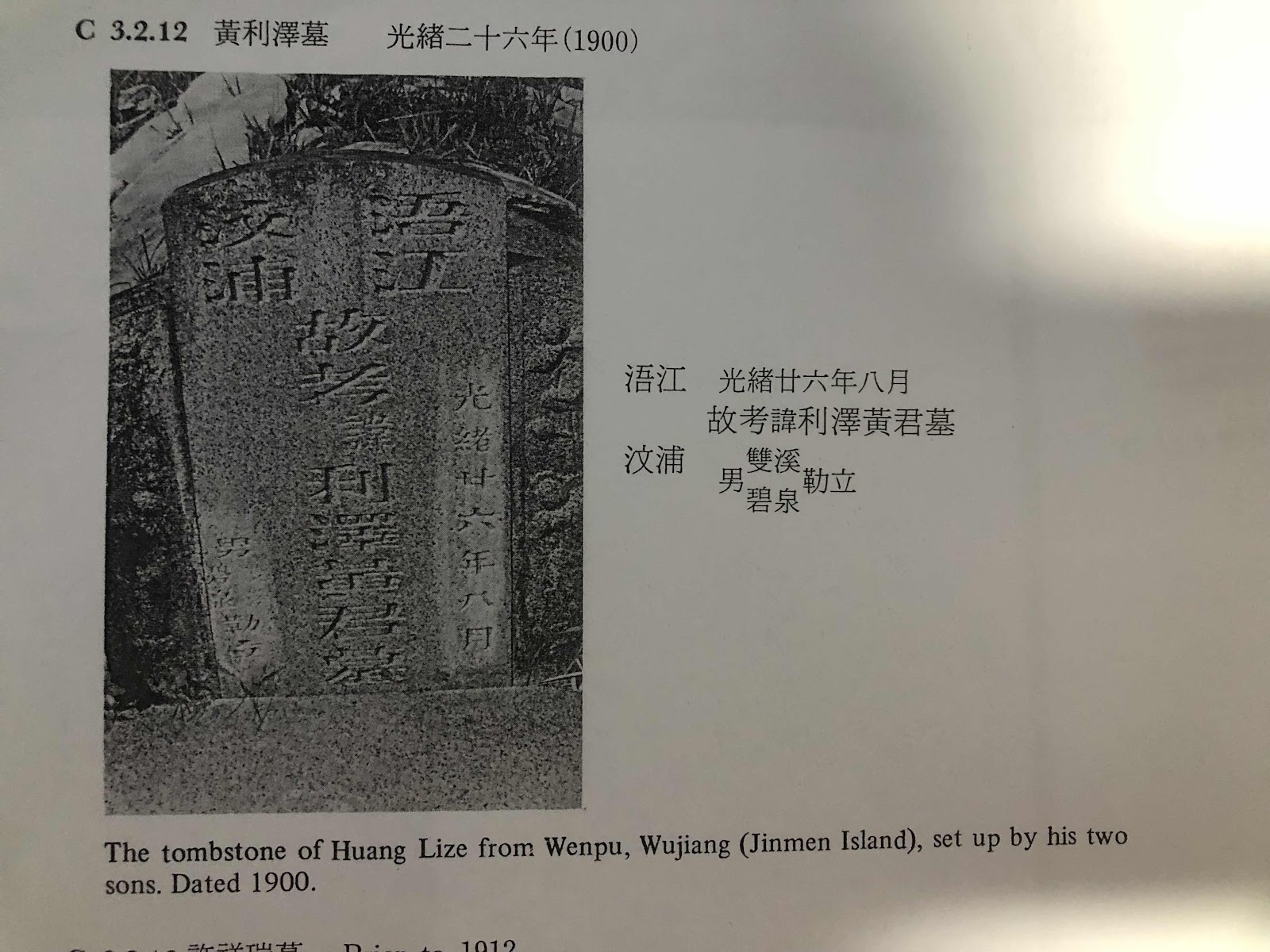 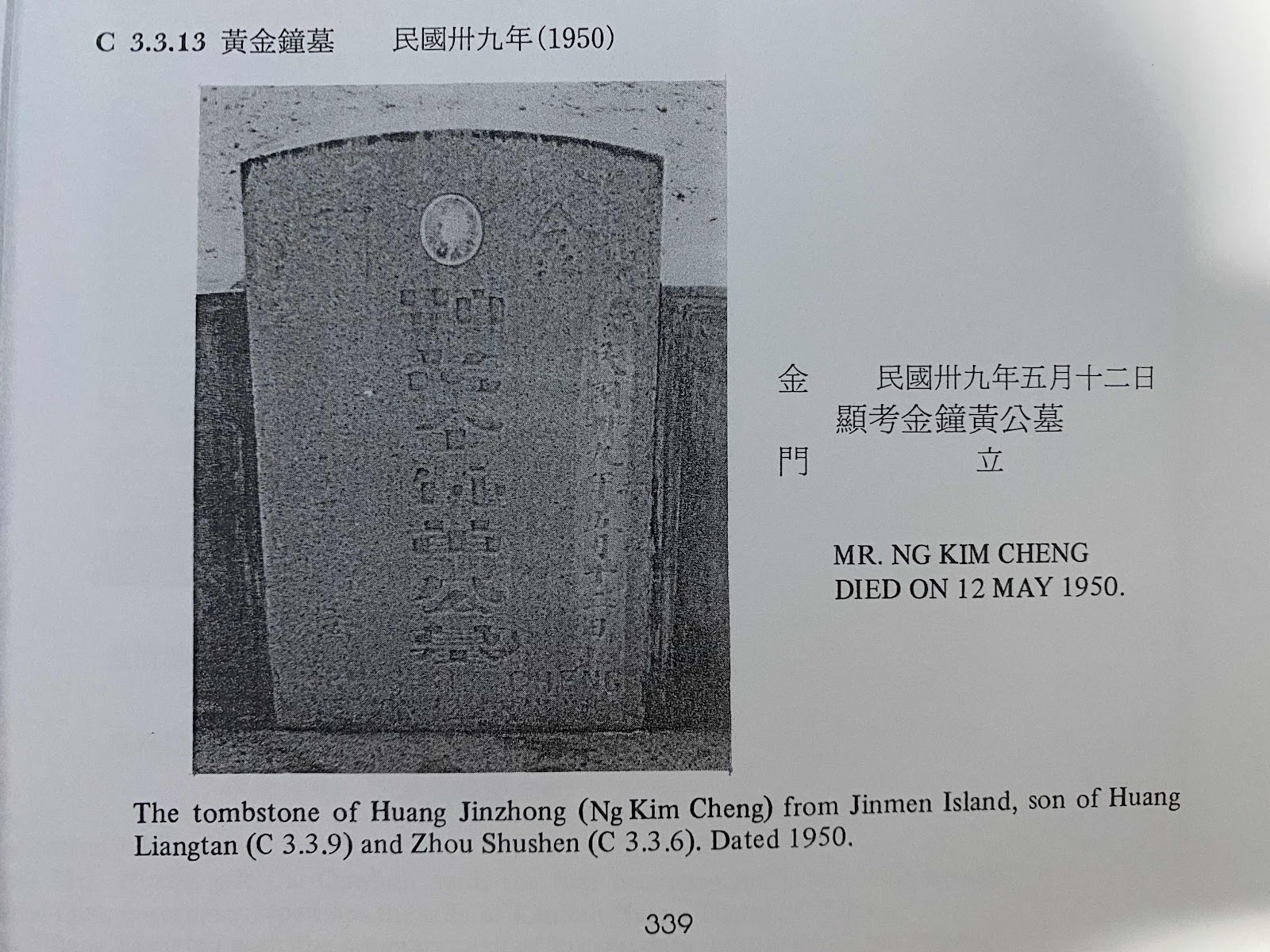 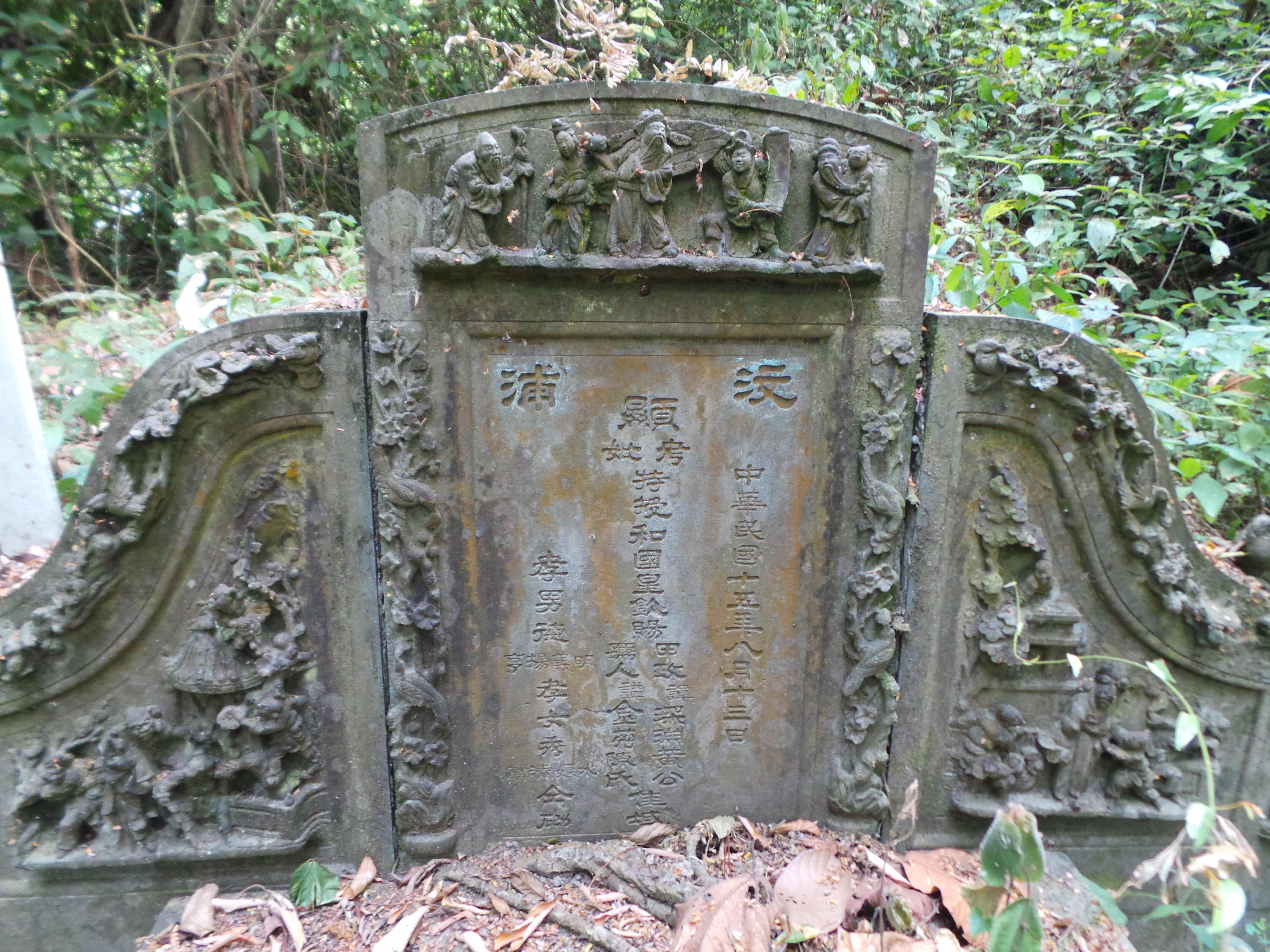 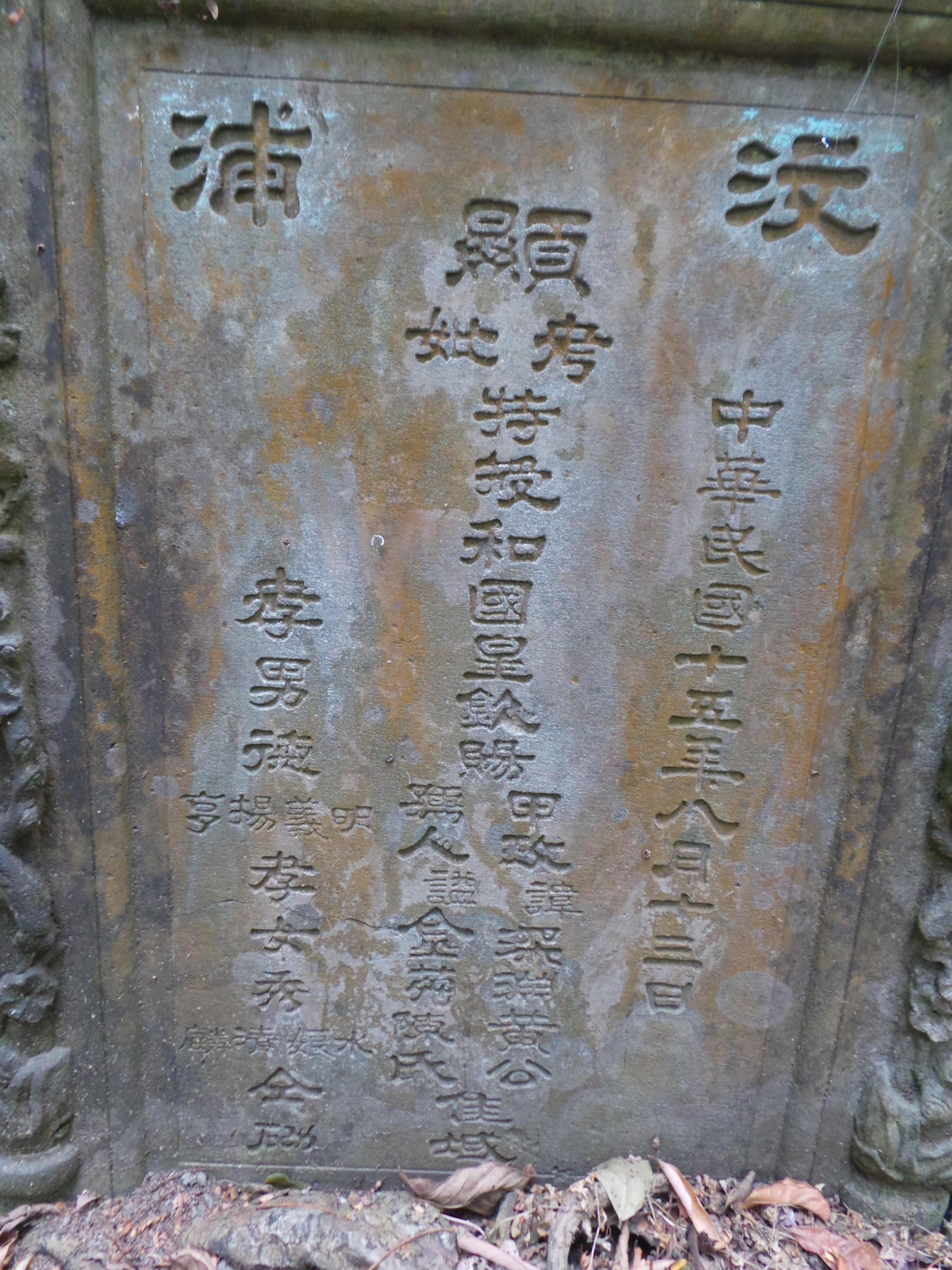 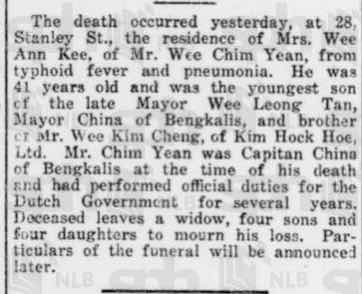 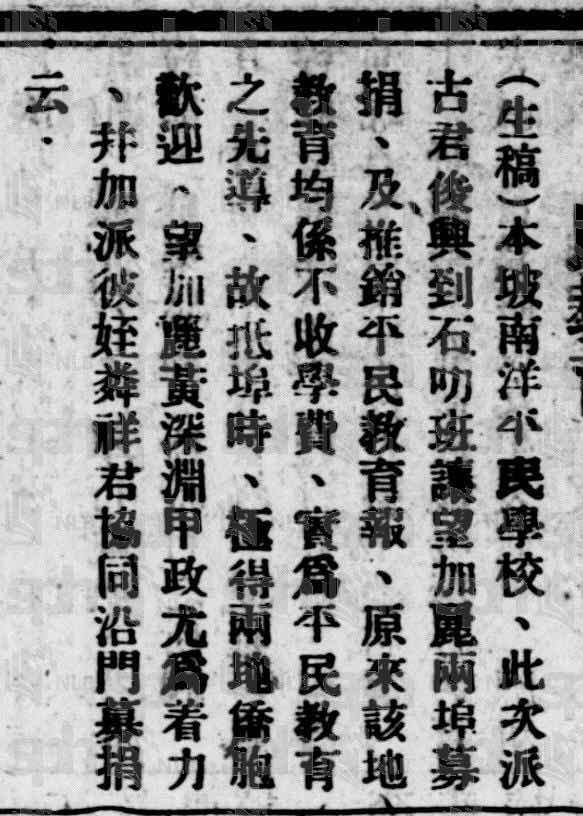 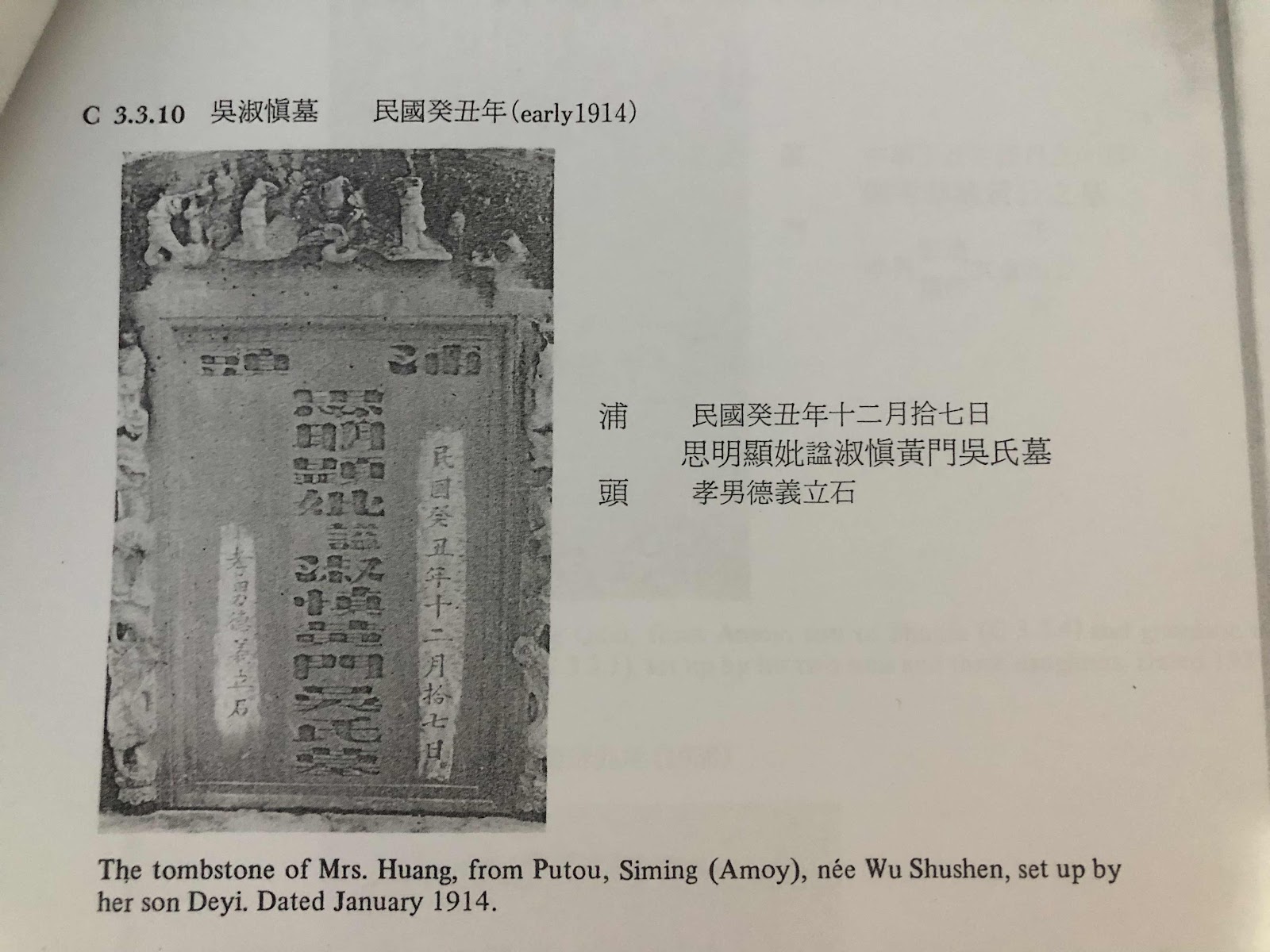