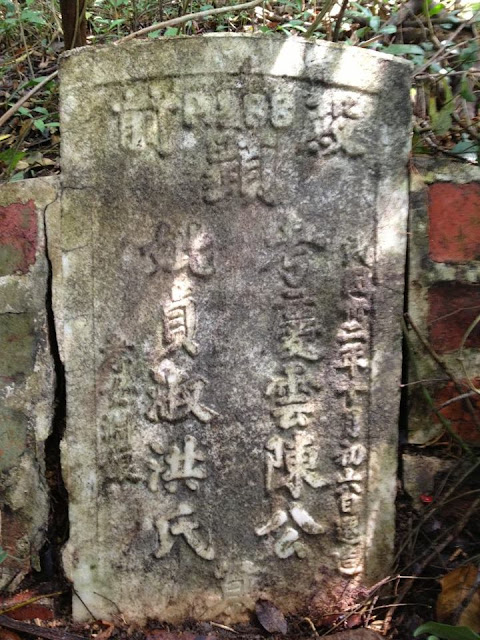 民國卅二年十月初六日遷造
考慶雲陳公 Tan Keng Hoon
妣貞淑洪氏 Ang Cheng Seok
孝女
淵娘 Tan Yean Neo (Tan Yan Neo)
Tomb of Tan Keng Hoon (died 1877) and his wife Ang Luan Hong
Reinterred in Bukit Brown in 1943 on 3 Nov 1943
From 100 years history of the Chinese in Singapore by Song Ong Siang
In Dec (1892), Mr Justice Wood heard and dismissed the suit brought by Tan Koon San, who claimed to be entitled to a share in the estate of the late Tan Keng Hoon as his son by an alleged 2nd wife, married according to the usual Chinese customs, or in the alternative as his adopted son, who had been recognised as a member of the family by the widow, Ang Luan Hong, who had appointed him her attorney to manage the estate of the deceased in Saigon.

Tan Keng Hoon was born in Singapore, was Opium Farmer in Saigon at the time of his death in 1877.
He left considerable property in both places, including the well known Bukit Pasoh estate. Dying intestate, the whole of his great wealth eventually passed to his only daughter, Tan Yean Neo, who married Ang Teow Guan, the son of Ang Kim Cheak.

The ruling on Hau Lam 孝男