Recently a previous course mate of mine emailed to me suddenly.
He was writing in to say that his wife's mother recently came across some documents which provided her with some information
on the burial site of her mother many years ago.  She has been trying to locate the final resting place of her mum (his wife's grandmother) .
Prior to locating the document, she did not even know where her body was all this time.
Also she said that there was no tombstone on her mother's grave site.
The burial certificate 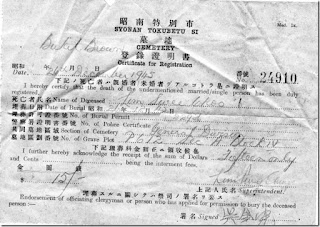 It was just after the war.  But they were still using the certificates issued by Syonan Tokubetu Si.  A single plot in the General Division cost $15 at that time.
The date of burial was 1945 Dec 26.  The certificate was issued on the same day, Dec 26, the day after Christmas.
Block 4, Section A, P612,  means that the tomb was located at Block 4,  Section A, which is very near to the Lim Chong Pang cluster.  P Series usually refer to the burial sequence during the war, whereby the burials is just next to the regular burial sequence (without the P)
Having led a tour in a morning, have a good lunch and finding 2 tombs successfully,  I was in a state of euphoria to find more tombs.  There were off days when I couldn't find any.
So I decided to find this tomb for my friend.
Tombkeeper Lim who has become my good friend, has agreed to help.  He has just helped me sawed away a small dead tree branch wrapping another tomb to confirm the identity of the deceased for another request.
Looking at the request of tomb no P612 Section A which is next to Chong Pang cluster,  he looked stunned.
"Why,  I have always looked at P609.  P612 must be nearby !"
Excitedly we hurried to the sector and to look at the graves.
Grave P610 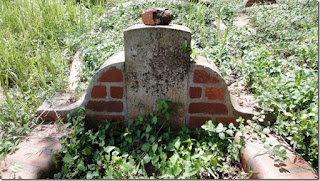 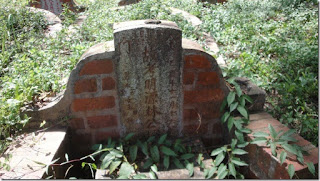 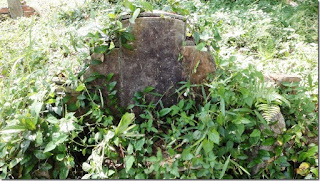 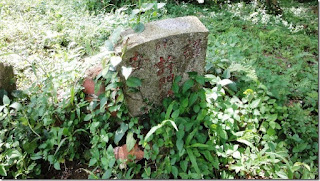 Yes, the sequence are all in order, and no jumping sequences as in some cases.
So we looked more carefully at the mound of earth again. 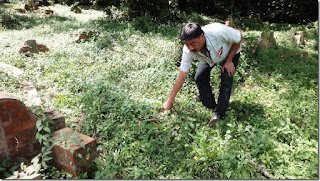 Tombkeeper Lim pointing to the tomb position of P612, of which there is evidence that it is a tomb despite having no tombstone.
There we found some small bricks which have sunken in.  Tombkeeper Lim remembered that as he used to after P609 for a long time,  he remembered seeing a wooden marker
on that tomb.  Perhaps it has disappeared due to the rain and weather.  We checked that there was some small little offering jar sunk inside the earth.  It is possible that many years ago,
someone has come to pay respects to the deceased before.
Based on the sequence, the date of burial, the burial sector and plot no, we have no doubt in our mind that the long lost tomb of Mdm Lim Swee Choo has been found.
I considered it a mini miracle, because it so happened that my friend's mother found the burial certificate,  it so happened that Tombkeeper Lim looked after an adjacent tomb, and it so happen that we can identify the burial sector to narrow down the search.
The tomb of Mdm Lim Swee Choo should not be affected by the road although the tomb is close by to the road.
I and Mr Lim are happy that we can help to locate this tomb to reunite this tomb to her beloved ones.
Every tomb tell a story, even for one that has no tomb stone.
Let us all remember our ancestors and roots in Bukit Brown, the only meaningful historical burial ground left of our pioneers and forefathers (and foremothers) who helped to build up Singapore.
Raymond
Remarks by Lian, granddaughter of Lim Swee Choo:
My grandmother passed away in 1945, when my mum was barely 2 yr-old.
My great-grandmother told my mum that her mother was born on "pua ri" (in Hokkien).
A very inauspicious day in Chinese custom. Person born on the day must have their tombstone erected within 100 days after death.
After that, it would bring bad fortune to the descendants.
However, this little secret was kept from my grandfather and family when they got married.
After her death, the family was mourning and apparently did not erect the tombstone immediately. My maternal great-grandmother only shared that 100 days after my grandmother passed away.
By then, it was too late. My grandfather passed away in mid-1990s.
By sheer fortune, we found my grandmother's death certificate among my grandfather's belonging
when we were clearing out the warehouse (warehouse of our business).
Bukit Brown Name - Lim 林 Year - WW2