on May 25, 2020
Exhumation notice published in Nanyang Siang Pau in Sep 1971 of the exhumation of Wee Hee and his wife and Wee Kay Cheang and his wife 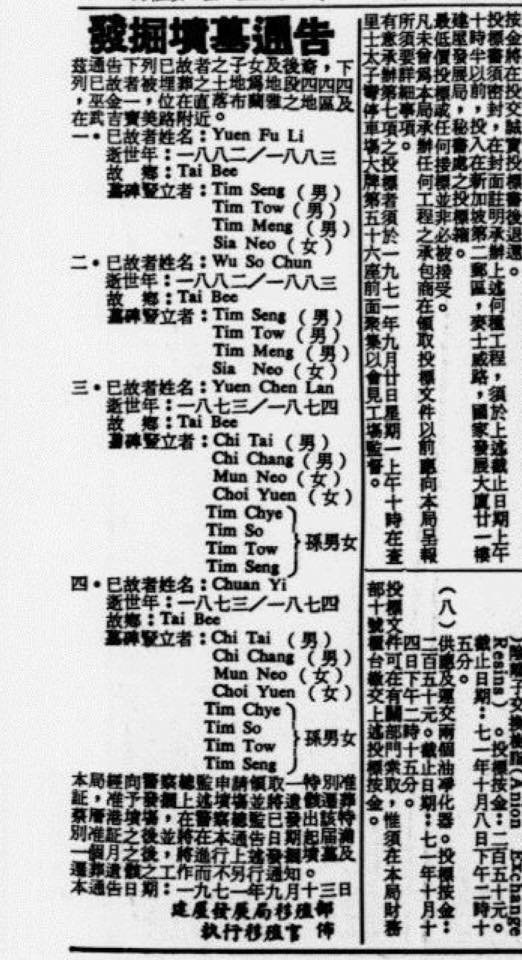 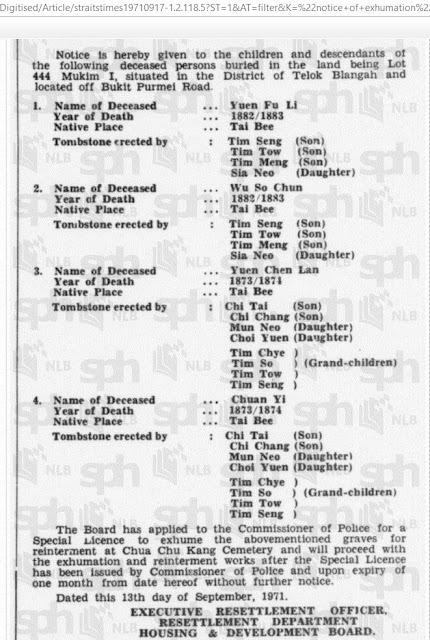 Sons: from the way they write, the middle son is the eldest as they copy from right to left ie
Tim Seng - 添成
Tim Tow - 添籌
Tim Meng - 添銘
Sia Neo - 霞娘 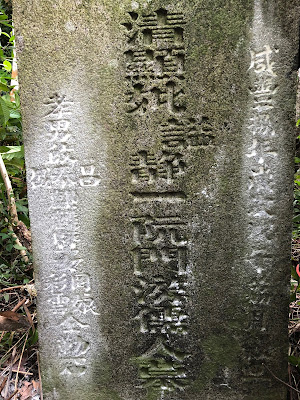 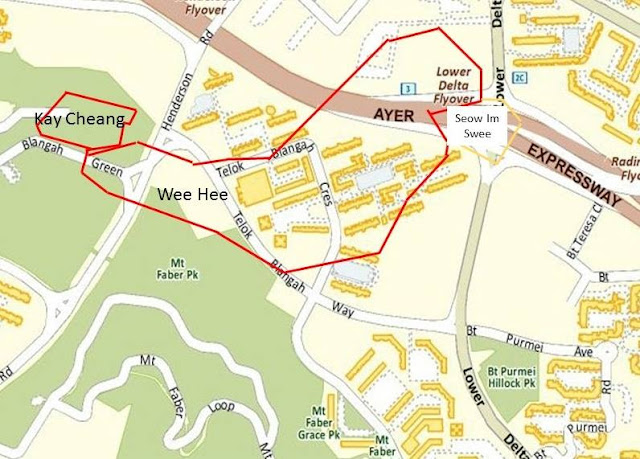 Based on analysis of the respective wills and land deeds with the help of Charles Goh,  I am now able to determine the final resting place of Mr and Mrs Wee Hee and Mr and Mrs Wee Kay Cheang. 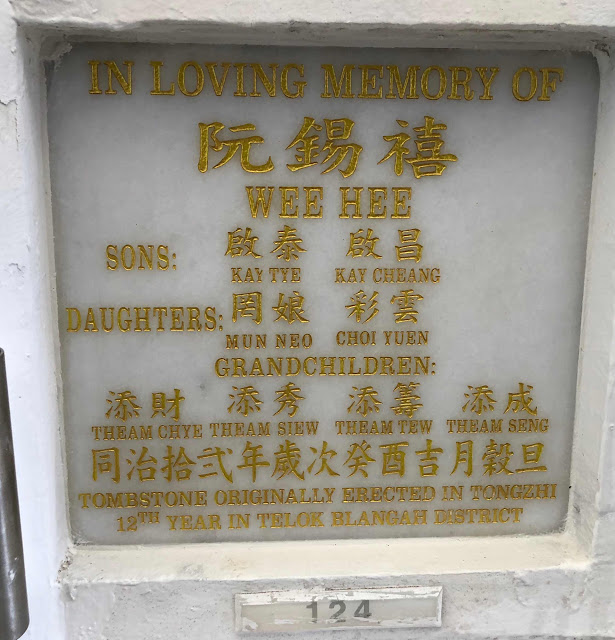 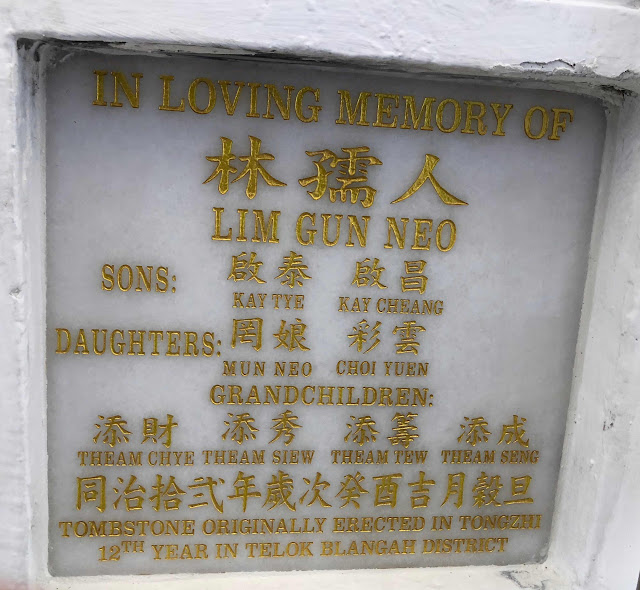 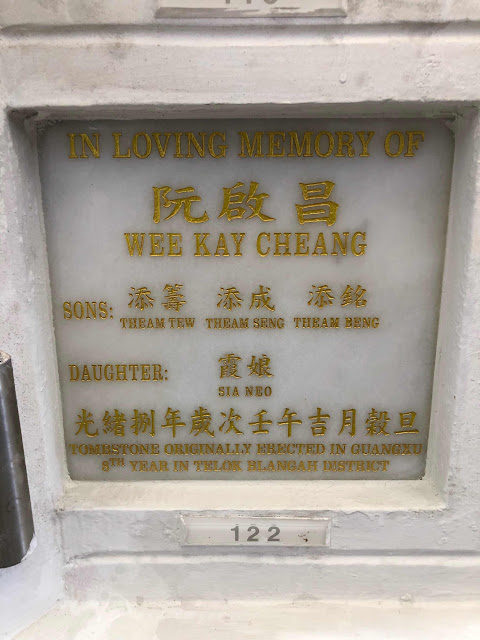 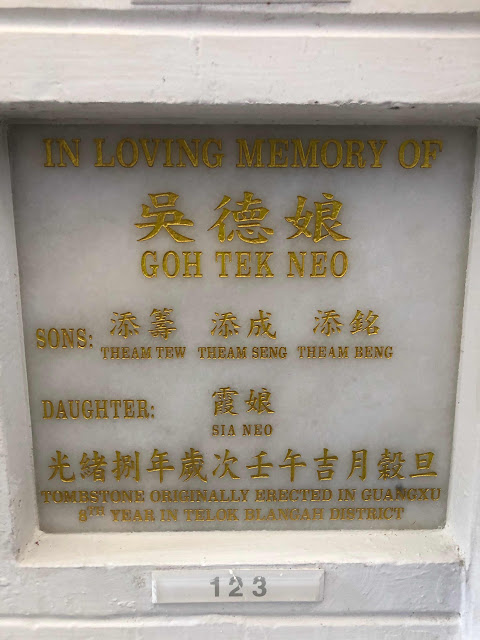 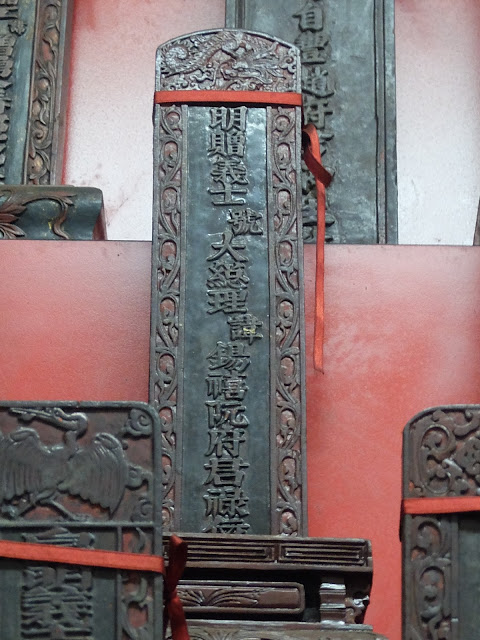 明贈義士號大總理諱錫禧阮府君禄位
The spirit tablet of Patriotic Guardsman Conferred By the
Ming the honourable Ruan， personal name Xixi, [who held the position of] General Headman 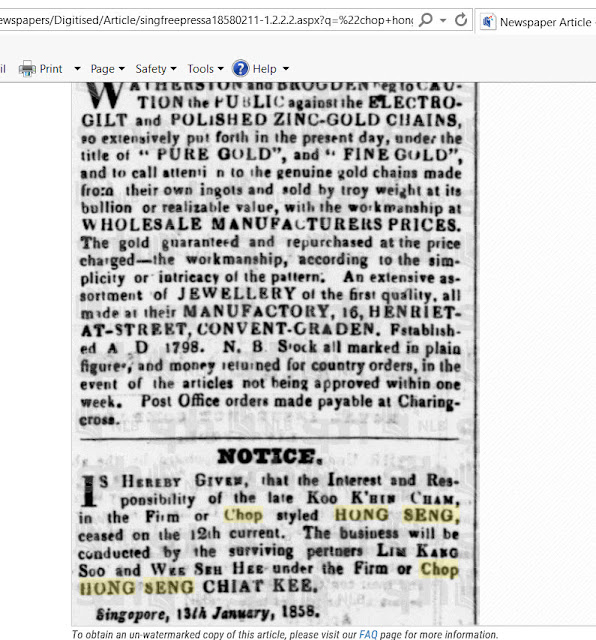 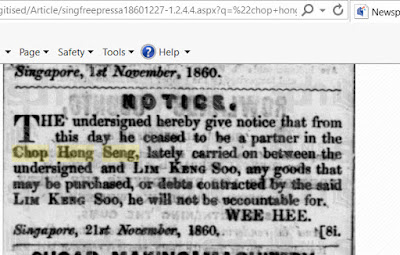 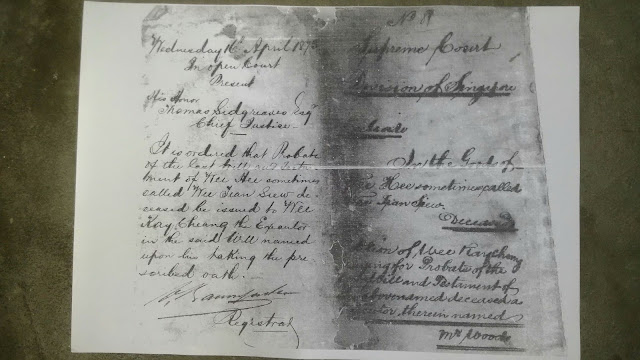 Wee Kay Cheang's will (in Chinese) 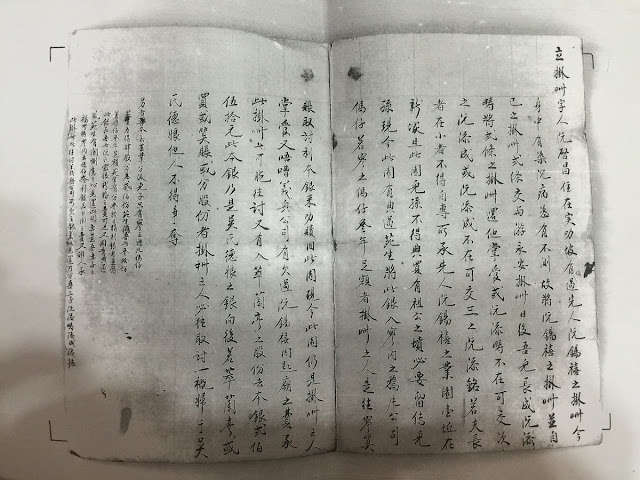 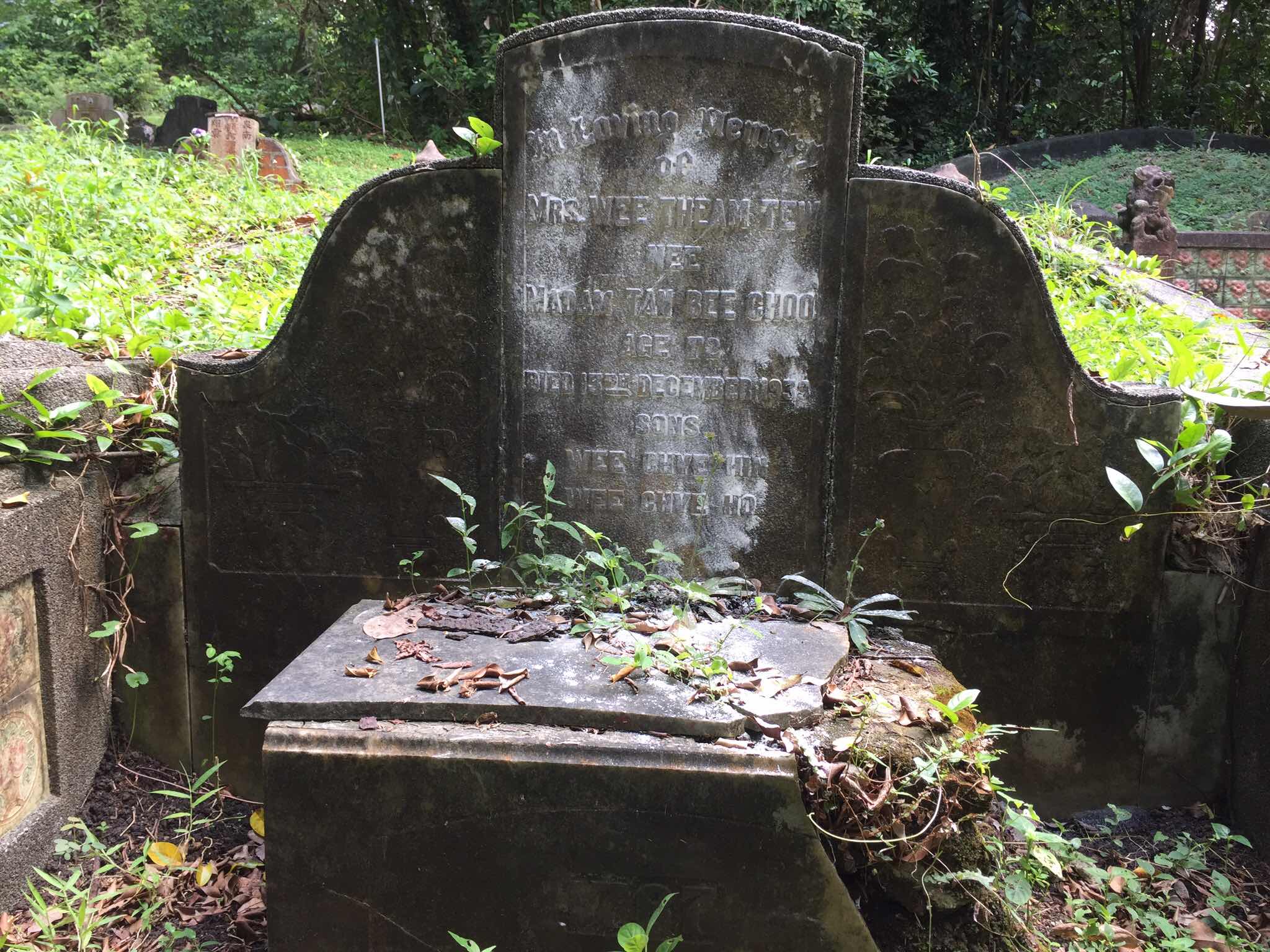 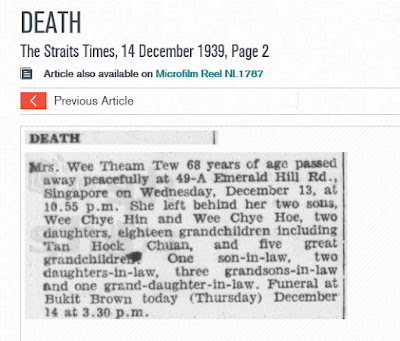 Her husband Theam Tew's brother was Wee Theam Seng's whose 6 daughters were married to: 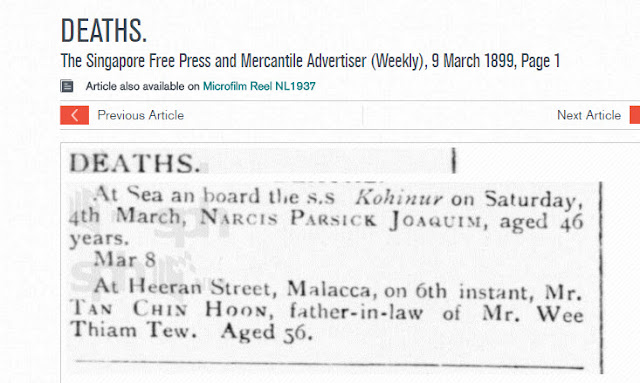 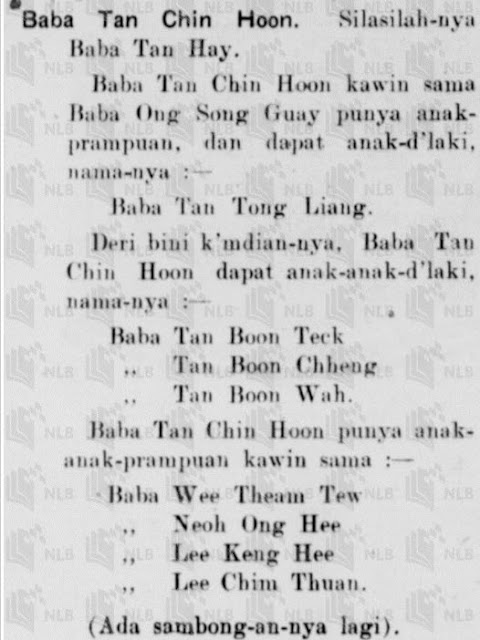 The Story of Wee Theam Tew

Source :  One hundred years' history of the Chinese in Singapore by Song Ong Siang 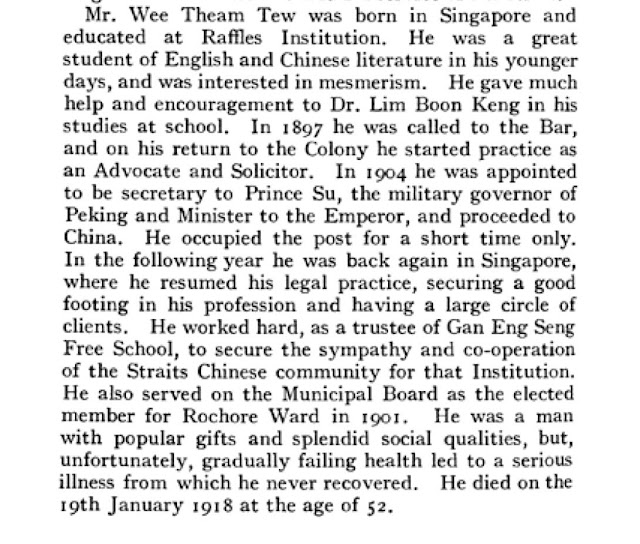 Mr Wee Theam Tew, one of the leading Chinese legal practitioners of Singapore, comes of a family who have resided in the Straits Settlement for 3 generations. His grandfather, Wee Theam Soo, came from China as a literary graduate, and together with Dr Lim Boon Keng's father and Mr Cheang Hong Lim's father, to whom reference is made on another page,  acquired the first opium farm in the colony. Mr Wee Theam Tew was educated locally, after which he entered a commerical house in Singapore and rapidly rose from the position of clerk to that of manager. He was however, attracted to the legal profession, and, enrolling himself as a student of Lincoln's Inn, he was called to the Bar in 1897.

Returning from London to the East, he was appointed secretary to the Prince of Su, the military governer of Peking,but after occupying that position for a short time, he came back to Singapore and commenced practice as a barrister. He has now attained an honourable position in the profession and built up an extensive practice 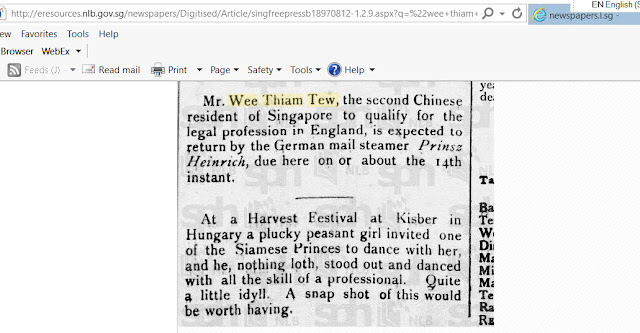 Wee Theam Tew calling to fight against the Boxers and the Manchus
STRAITS CHINESE FOR CHINA.
The Straits Times, 18 July 1900, Page 2 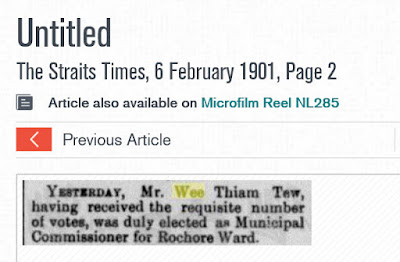 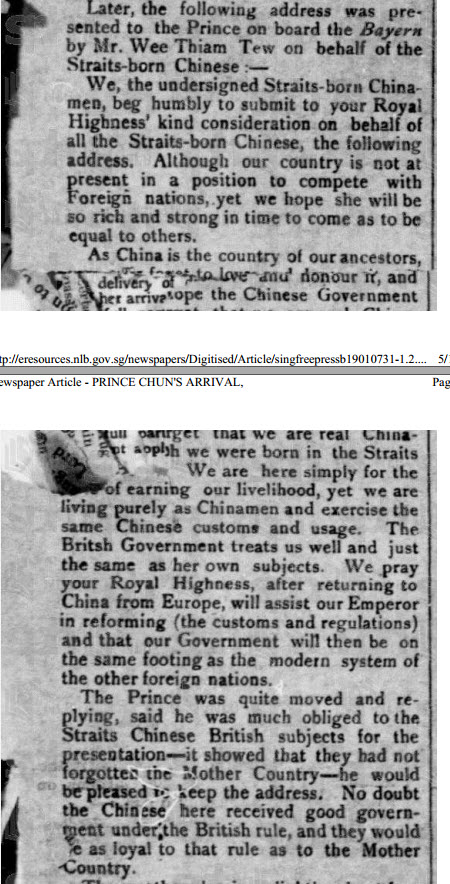 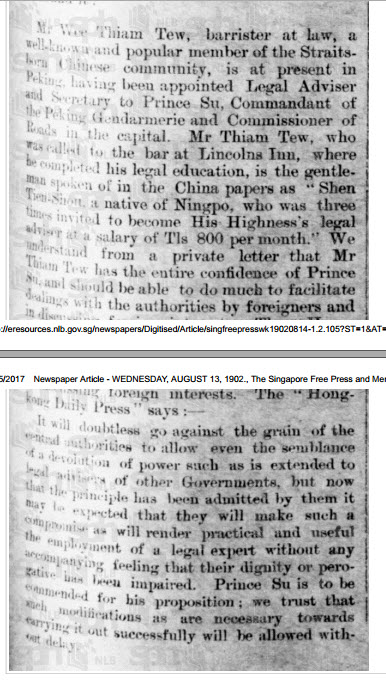 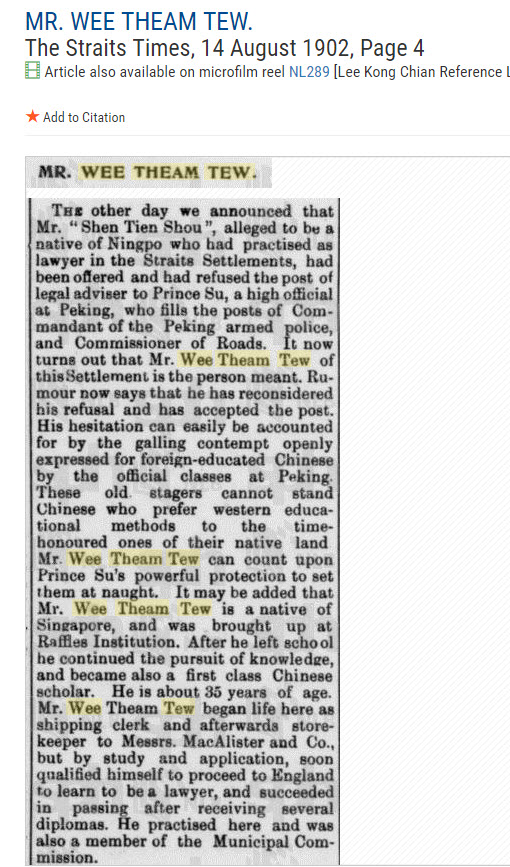 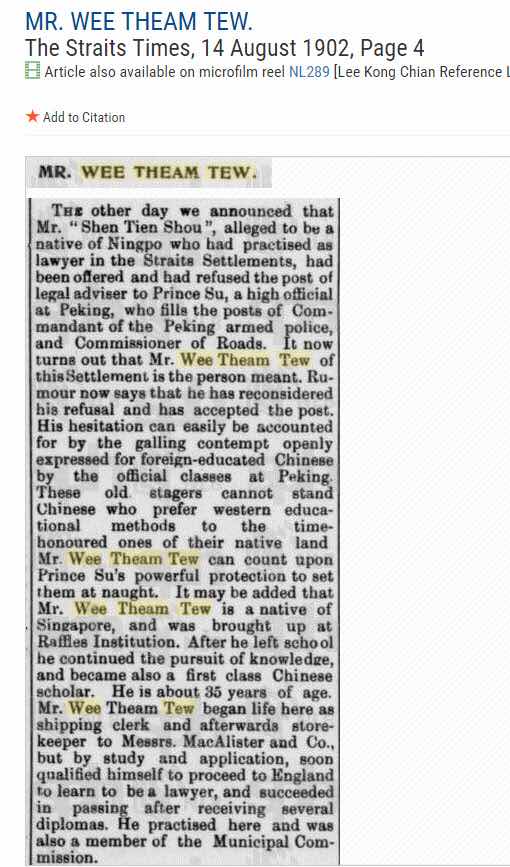 阮添疇 Wee Theam Tew a Chinese fr. Singapore who says he and his father were born there was introduced by Cowie, to talk abt. the Kalgan line. He says Chang Yen mao and
Wang Wen-shao sent for him to ask whether he cld. raise money in Singapore for a railway to Kalgan. They said China had not the money, and the Russians who were pressing them wd. certainly insist on doing it themselves if they did not. But there was an agreement that
it must be built by China herself, with her own money. Now he could easily get the money
in Singapore, and Chang Yen mao said the Govt. would give a guarantee of 5%. If he got
the concession wd. he be supported? For otherwise the Singapore Chinese wd. simply lose
their money.
I said I wd. think over it, and if I had anything to tell him, wd. send to him thro’ Cowie.
Teleg’d to Fr[ank]. Swettenham to ask about him. 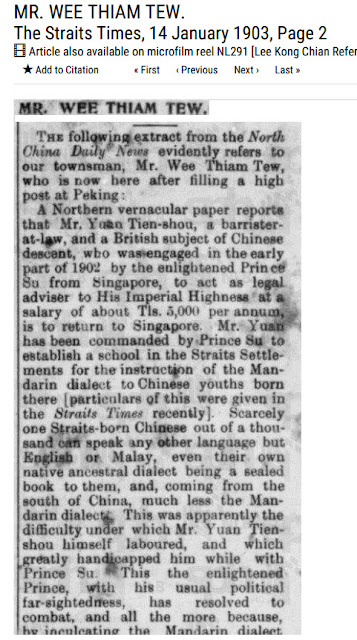 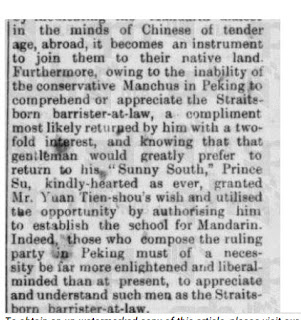 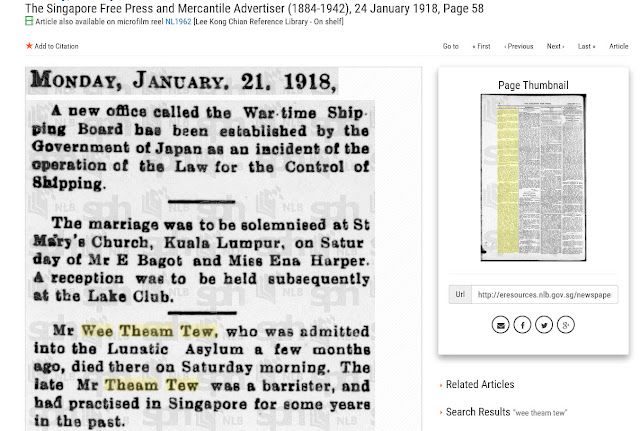