on May 24, 2020
Khoo Chong Seng was born in Malacca around 1845.  After marrying a daughter of Ong Ewe Hai, he went to help his father-in-law in Sarawak from 1878 to 1889, after which he was in charge of the Singapore office till he retired in 1900.  He amassed a lot of properties and join the famous Ching Keng Lee & Co in 1913 as a partner.  Khoo Chong Seng's daughter Khoo Kwak Neo was married to Yeo Hock Hoe, one of the two founders of Ching Keng Lee & Co.

Khoo Chong Seng died in 1925 at the age of 80 and was buried in the Khoo Chan Cemetery at Silat Road.  There was an estate named after him in Bukit Timah in the past 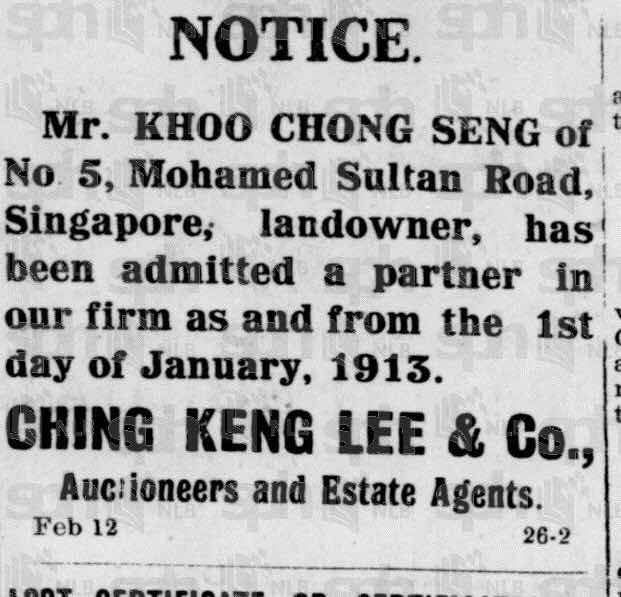 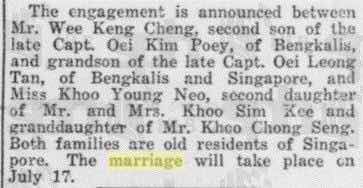 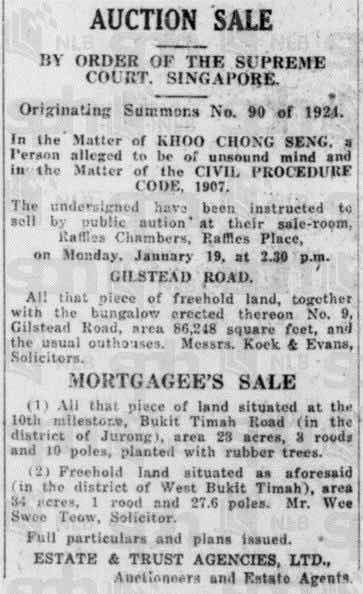 In Jan 1925, Khoo Chong Seng was alleged to be unsound mind by the courts and some properties were sold 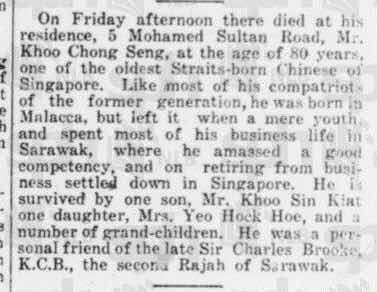 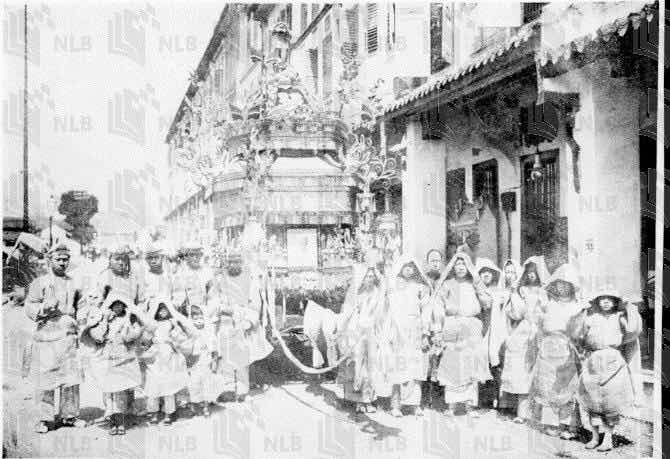 Funeral of the late Khoo Chong Seng, a well known member of the Straits Chinese community

Manager of Messrs Ong Ewe HAI and Co from 1878 to 1889, after which he was in charge of the Singapore office retiring in 1900

From : One Hundred Years’ History Of the Chinese in Singapore
By Song Ong Siang

As a result of the visit with Lim Eng Moh to Sarawak, the firm of Ewe Hai, Moh & Co. was established in 1846, and from the start it prospered. Having at that time no firm or representative in Singapore to act as consignee, the young trader had to bring the Sarawak produce to Singapore himself. With all the proceeds of each sale Ewe Hai purchased a miscellaneous lot of suitable and attractive goods which he took with him back to Sarawak.
Becoming known to the merchants here as a man of straightforward dealing and good character, Mr. Ewe Hai easily got any amount of trade wares on credit, and he took full advantage of his opportunity. After some ten years' experience as a travelling merchant, the firm of Kay Cheang, Ewe Hai & Co. was founded in Singapore in 1856, and this firm in 1872 became Ong Ewe Hai & Co

In the early part of his stay in Sarawak, Ong Ewe Hai had to pass through much novel experience as regards means of subsistence and quarters. Luckily for him he happened to make the acquaintance of a petty Malay chief with whom he lived for some time, eating whatever food the chief had prepared for himself and his family. In his later years, when he had amassed a fortune and was able to rest on his oars, it gave him pleasure to relate his early adventures in Sarawak, how he had with his partner Lim Eng Moh every morning to go out paddling on the river in a small prahu to collect the produce gathered by the natives—and how, as there were numerous banana trees in the yard of his Malay host, a preparation from the ban

Mr. Ong Ewe Hai died in Singapore on the 9th June 1889 in his sixtieth year, and was buried in his estate off Bukit Timah Road, behind Holland Road railway station, where also was buried his wife, who died on the 11th June 1895 at the age of 64. After his death the firm was carried on by his sons Ong Tiang Soon and Ong Soon Tee and son-in-law Khoo Chong Seng, who left the firm in 1900. 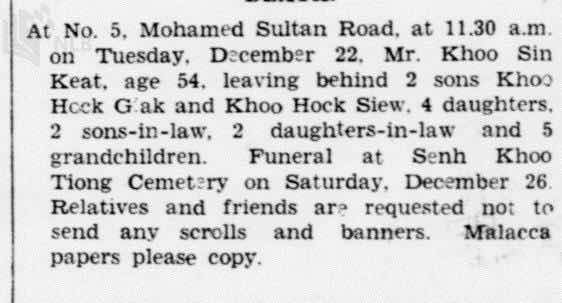 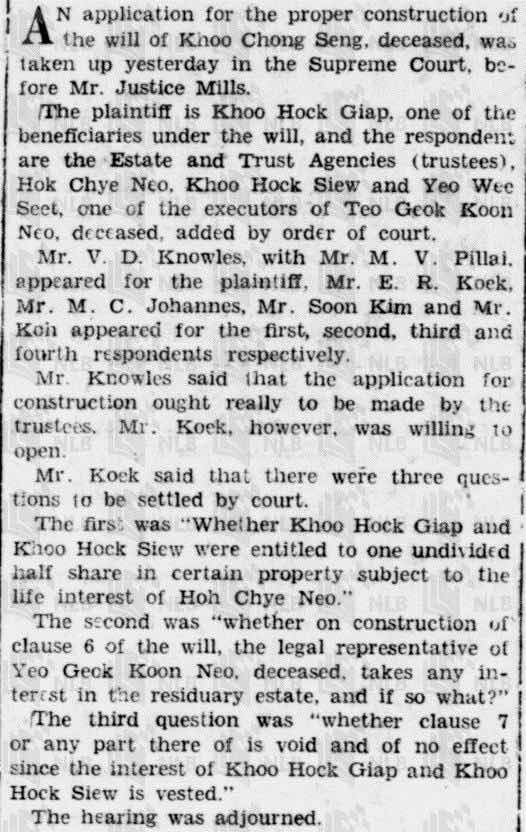 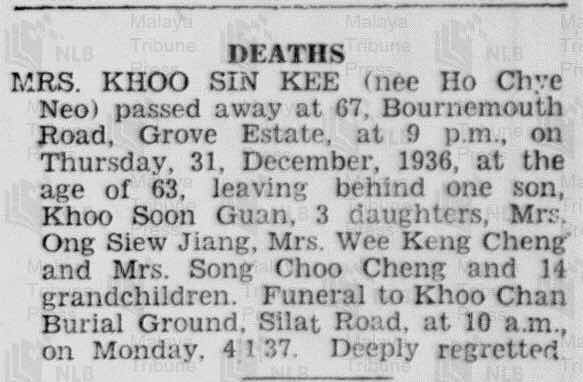 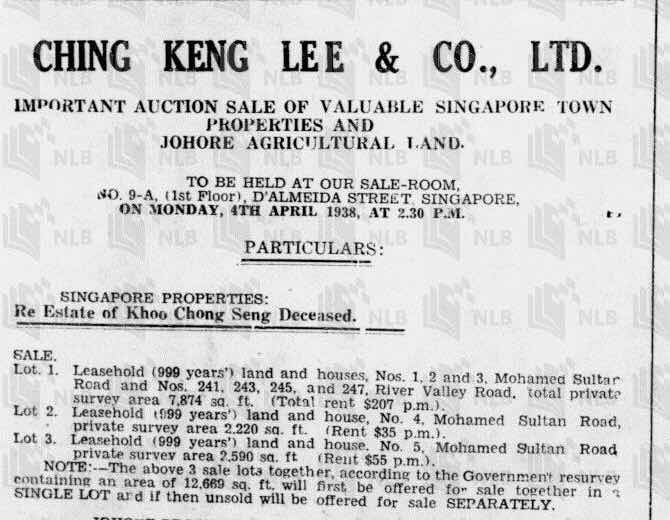