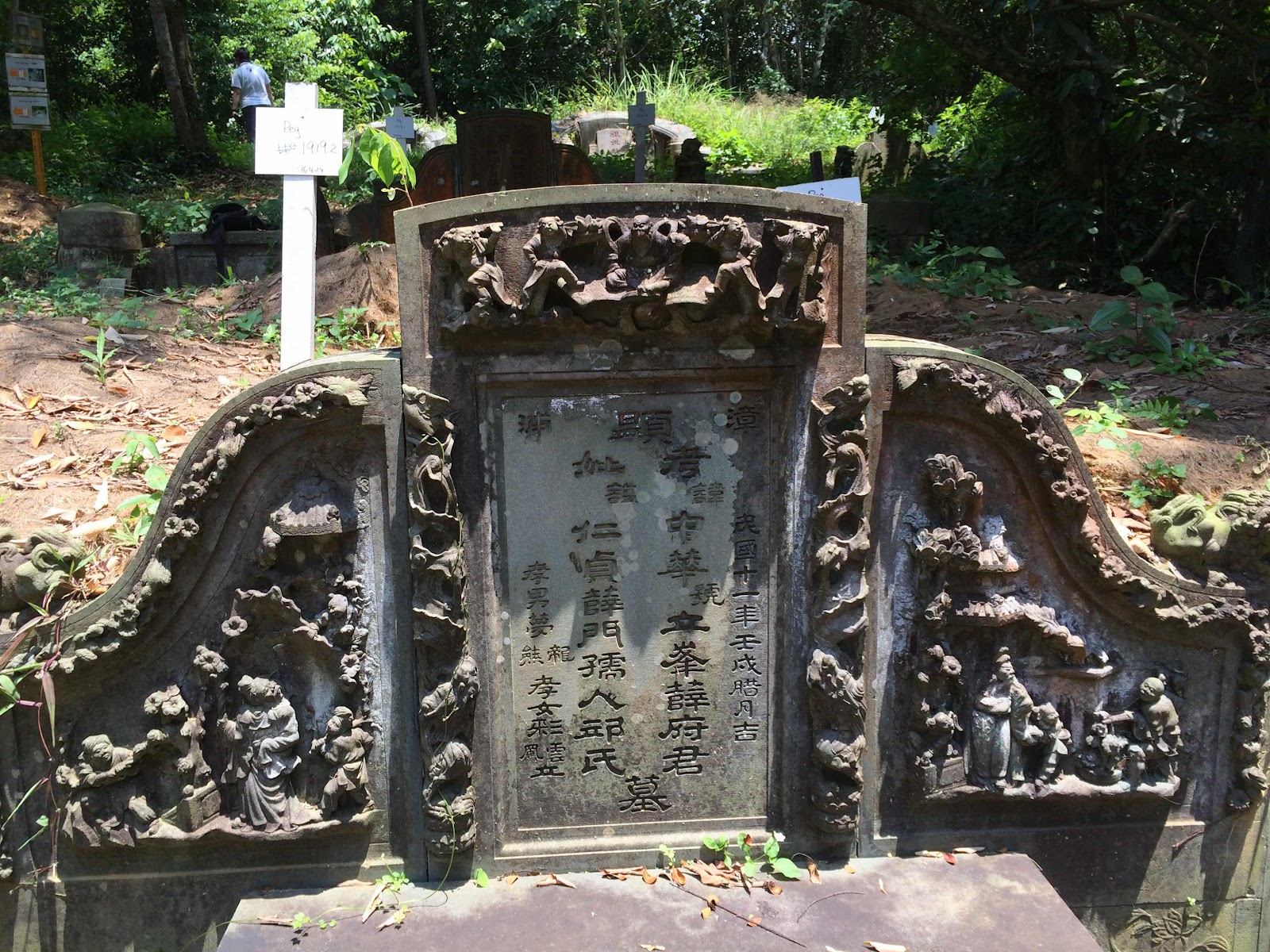 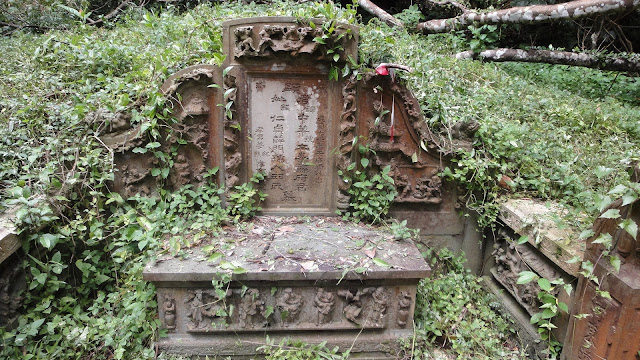 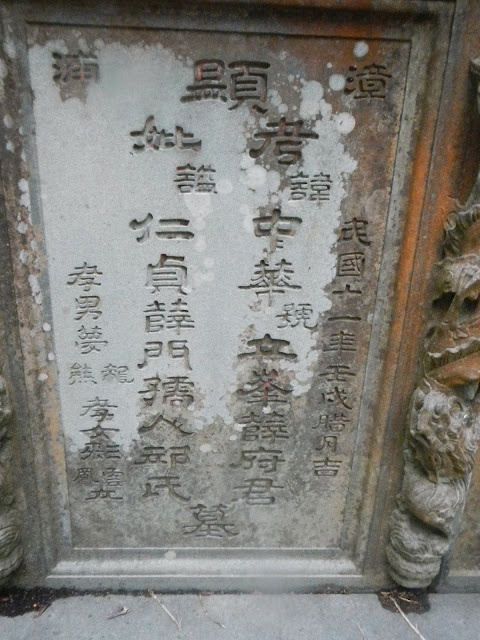 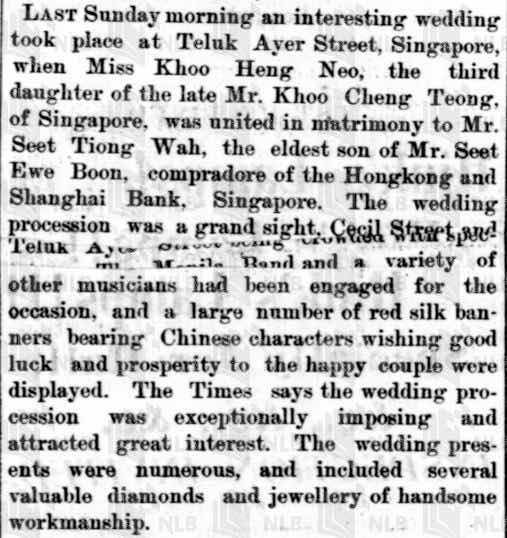 Mr See Tiong Wah
Mr See Tiong Wah, a well known Singapore Chinese, died at his residence in Balmoral Road yesterday. He was age 55.
Mr See took a big part in public affais in his younger days, and during the lastwar he, with other Chinese, aided in the collection of funds and received the thanks of the  Government for his services, particularly to the "Our Day" Red Cross Fund and for his work on food control.

Mr See Tiong Wah was at one time compradore of the Hongkong and Shanghai Banking Corporation.  His funeral takes place on Monday

Mr See Tiong Wah beloved father of Mr See Bong Him, Mrs Helen Gan and Mrs Lucy Chen, on May 2nd, at his residence No 23 Balmoral Road.
Singapore, leaving behind him his widow Mdm Khoo Heng Neo, one son, two daughters in law, 2 daughters, one son in law and 19 grandchildren to mourn his loss. Funeral on Monday 6th instant at noon for Bukit Brown. Friends and relatives are kindly requested not to send any scrolls or music. F.M.S Hongkong and China papers please copy

To the editor of the Straits Times

Sir,- By the death of Mr See Teong Wah, JP, another link with the past of Singapore is shattered.  A son of the late Mr See Ewe Boon, Mr Teong Wah was educated in St. Joseph's Institution, and at the early age of 18, he assisted his afther in the Compradore's department of the Hongkong and Shanghai Bank, Singapore.  There he served for nearly 30 years.

He was a born leader and closely identified himself with the welfare of the public, holding office as homorary treasurer and committee member of the S.C.B.A, president of the Chinese Chamber of Commerce, president of the Hokkien Hoay Kuan, auditor of the Royal Asiatic Socity, a member of the Chinese Advisory Board, a Justice of the Peace, and a Municipal Commissioner, among many other appointments.

At the Centenary of Singapore celebrations, Mr See Teong Wah represented the Chinese community in the presentation of an address of congratulations to H.E the Governor, Sir Arthur Young, and in 1922, he was the chief Chinese delegate at the Malaya Borneo Exhibition  During the war of 1914 - 18, he was the most energetic in subscribing and raising funds for patriotic causes.

His ancestors migrated to Malacca from China 300 years ago and founded the house of Gim Hin. His daughter Lucy married the eldest son of H.E. Chen Tiao Yuan, at one time Provincial Governor of Shantung, and his son, Bong Him is the son-in-law of the late Mr Lim Nee Soon, J.P.

As Mr Teong Wah retired from public life more than 10 years ago, some of the present generation may have forgotten him, but it seems only appropriate for one who is grateful to his memory to place on record a tribute to the good he did in his lifetime to Malaya and the Empire at large - Y
Yours Etc,
O.T.G
Penang, May 7

In financial circles in Singapore and indeed throughout the Straits Settlement, Mr See Ewe Boon and his son, Mr See Tiong Wah, are well respected alike for their ability and integrity.

Mr See Ewe Boon, who since 1890 has been the compradore of the Hongkong and Shanghai Bank at Singapore, is the second son of the late See Eng Watt, a well known Chinaman, who was born in Malacca and was the first Chinese British subject merchant in Amoy for a great no of years. The gentleman whose name is at the head of this sketch went to Pinang at an early age and received an English education at St Xavier's institution. Subsequently for a short time, he traded at Amoy before entering the employment of the banking corporation which he has so long and so faithfully served.  He is now in his 50 year.  His son Mr See Tiong Wah, entered the Hongkong bank in 1901 upon leaving school, and has made steady progress until now he is the assistant compradore, and as such, is his father's right hand man.

It is with regret that we learn of the death of Mr Seet Ewe Lay, which occured at 93, Chin Swee Road, yesterday morning from cardiac failure. The deceased had been ailing for a few weeks only and the news of his death surprised him numerous Chinese and other friends this morning.  He was the editor and the proprietor of the Chinese evening newspapers, the Lat Pau and was well known and much liked among the Straits born Chinese community  He was born in Singapore and leaves a wife and large family.  The deceased married the daughter of the late Mr Chia Ann Siang. He was 55 years of age
Family - See Hood Kee Name - Khoo 邱 Name - Seet 薛 Region - 漳浦