Stereoviews were popular in the 19th century. Two photographs of the same image are taken at slightly different angles and placed side-by-side on a card. When looked at through a binocular viewer, they create an illusion of depth.

A note on the back indicates the photograph was taken in Singapore and that the subject is a rich Chinese merchant from Malacca “who has Malay blood through the women”. Although it does not specifically mention Tan Kim Ching, Jagor singles him out by name in his travelogue published in 1866. He also describes the Peranakan community at length, which altogether strongly suggests that the image is a portrait of Tan and his family.

This stereoview is the oldest photograph on paper in Singapore’s National Collection. (Taken from https://www.peranakanmuseum.org.sg/.../exhibi.../amek-gambar)

Some Chinese have acquired great wealth and are among the most respected citizens of the city; some have given significant sums for public purposes. One of the most outstanding among them is Tan-kim-ching.

His house in the city is such a beautiful example of Chinese design that a brief description might be of interest. Through an elaborate door in open work one enters the vestibule. On the right as well as on the left wall of the same is an uninterrupted series of carved chairs and tables, two chairs and a small table of the same wood. The tables are taller and narrower than the chairs, but have the same depth, so that the whole series seems to be of one piece. By this arrangement, each guest has at the right or left half of a table available, to hang up the arm or drop his teacup. The decor is so pretty and functional that it deserves imitation. As here on land a hard, cool seat is more pleasant than a warm pad, so the floors of the chairs are usually made of wood or spanish pipe. But in this house they consist of peculiar flagstones, of a kind[S. 47] Limestone, from the sight of the Florentine ruin marble, but art helped to do this by producing infiltrations through suitable pickling at certain points. In some plates, the drawing provided by nature has been very skilfully used, and by adding a few lines and prints a very nice picture has been made, while in other plates it has gone too far in helping, so that at once the hand of man reveals itself. These plates are said to come from Yunnan and Szechuen, but the art of making them has now been lost; At least later in Canton, I found out that there was a lot of demand. Perhaps their rebirth in Europe is imminent through the use of Kuhlmann's discoveries.

The back wall of the vestibule consists of richly carved, openwork woodwork with mother-of-pearl inserted; it is divided into three parts by two doors reaching to the ceiling. Behind it is a room in the same style, but richly decorated and furnished: instead of the back wall there is only a row of delicate pillars through which one enters the tiled courtyard. On either side of it a projecting roof forms a passage protected against the rain. 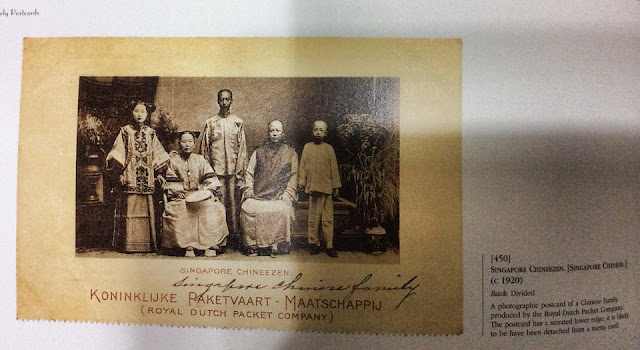 Picture is that of Tan Kim Ching Family :

From Left to Right :