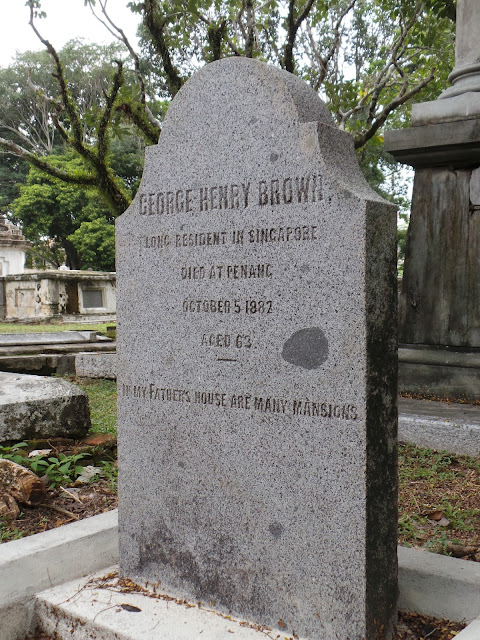 IN MY FATHER's HOUSE ARE MANY MANSIONS 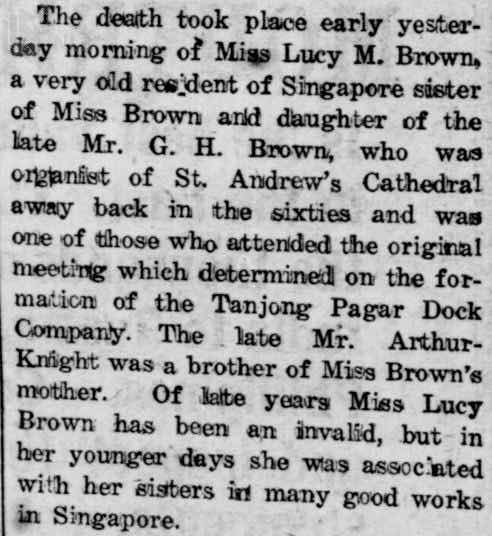 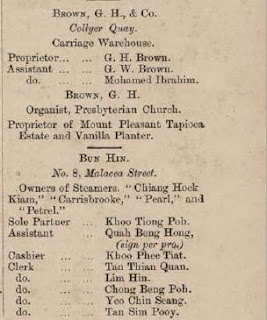 A Hill for Mr Brown - The Beginnning 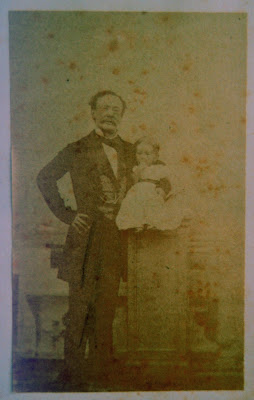 It would be the same year in 1854 that a 27 year old Ellen would first step onto the shores of Singapore. At age 27, she was considered someone left on the shelf, still unmarried.

But Cupid smiled on her, for she would met and fell in love with young George at that time and very soon both of them got married. In time they would have several children, including one son George William Brown and several daughters including a Lucy Brown.

Ellen’s brother Arthur Knight would come in 1860 to help his brother in law in business and would later become a prominent inhabitant in Singapore.

George would also have owned some ships, for example the 800 MT Malacca, and the Christian.

Later on he would have shifted to Raffles place, as shown in a 1877 directory, a G H Brown & Co was also listed there under Merchantile, although the date of establishment was put as 1865.

At that time he already got a son George William Brown to help him in his business.

George Henry Brown also bought big pieces of land and properties in Singapore, including a big piece of land off Thomson Road.

It was there surrounded by thick jungle, but he managed to clear it to build some houses. He also once shot and killed a tiger.

There was a hill there, and since he like the area, which was pleasant to him, he named it Mount Pleasant. One of those cottages he built was Fern Cottage, and there one of his staff G M Dare stayed with his mother and sisters.

" The jungle round is full of wild animals ; pig, deer, tigers, and many snakes. Mamma encountered no less than three snakes one morning before breakfast, when going her rounds to the fowl-houses, and the mandor captured a python sixteen feet long, sneaking off with a fowl at the foot of our hill, not 200 yards from our cottage, which mamma, who has a particular horror of snakes, was shown coiled up in a fowl basket.
There is a small stream at the foot of our hill, and we are constantly finding tiger tracks there. One evening, when I was fishing, I heard a rustle and a lapping sound, and just caught sight of Master Stripes in the lallang on the opposite side : my heart was in my mouth, 'as I dared not move for fear of attracting his attention; but as soon as he made off, I bolted for dear life up the hill."

Mr. and Mrs. G. H. Brown and family, and her brother, Mr. Arthur Knight, lived in the big house. Mount Pleasant, on the same hill, which belonged to Mr. Brown and still goes by the name of ' ' Brown's Hill '

Mr. Brown was very musical, and owned a fine organ and three pianos, one of which he most kindly lent to the Dares.

On the 16th March 1863 J. J. Dare brought the rest of the family up from the Cape in the clipper-steamer Clan Alpine, of Jardine, Matheson's, Captain Bolton (who afterwards married the second Miss Dare [Louisa] on the 23rd February 1864).

George Henry Brown indeed was very musical, and he played the organ at St Andrew’s Cathedral in the 1860s. He was also in the original committee which determined the formation of the Tanjong Pagar Dock Company.

He also tried to plant several crops in Mount Pleasant, including nutmeg and coffee but failed.

Meantime Ellen has befriended Anna Leonowens, and the two became the closest of friends. But tragedy struck Anna Leonowens, her husband Thomas Leonowens died in Penang in 1859 and the young widow was at a loss what to do.

Ellen Brown and Anna Leonowens then discussed and considered various options, including setting up a school to teach English, but finally in 1862, Anna accepted an invitation by a Chinese merchant Tan Kim Ching to teach English to the King of Siam’s family. (So begin the story of The King and I)

Life in the 60s was an exciting time for the Brown family George, Ellen and Arthur.

The Brown family kept unpublished dairies and photos of the golden period then.

However, an unfortunate accident happened to Mr Brown one day in the early 1880s while operating a tapoica cutting machine. He injured himself with the machine and went to Penang to recuperate.

It was there in Penang in 5 Oct 1882 that he died, perhaps of septicemia due to the injury and was buried in Penang in the same cemetery as Francis Light and David Brown who was the pioneer of nutmeg plantation and also big landowner who contributed much to the Snake Temple in Penang.

In 1883, another sad incident occurred. George Henry Brown’s son George Brown Junior went out to fish at the small stream near the foot of Mt Pleasant where he resided, was found dead in the stream. As he had epilepsy, it was supposed he was seized with a fit while fishing and drowned.

In 1903, Ellen Brown died at Grassdale, River Valley, where her brother Arthur Knight also stayed. She was 76.

There was a triangulation station at a hill top named Bukit Brown, point 138 (138 feet) surveyed sometime in the late 19th century. It is located at current Lao Sua

The original Bukit Brown would be Brown’s Hill where George Henry Brown would have lived.

The land where Bukit Brown Cemetery is situated now was owned by a Mr Mootapa Chitty (a Chettair) and a Chinese Lim Chu Yi ( 林祖义)
In 1872, 3 Ong clansman from Bai Jiao village, Ong Ewe Hai (王友海) ,Ong Kew Ho (王求和) and Ong Chong Chew (王宗周) each contributed 500 dollars totalling 1,500
dollars bought a piece of land 221 acres where Bukit Brown was from the owners , and donated, without condition, to Hokkien clansmen for purposes of Dwelling, Farming and as burial grounds. It was called the Seh Ong Sua (姓王山)

Around 1918/19 the government acquired part of the Ong clan land, which was 98 acres for Bukit Brown Municipal Cemetery.

In 1923, the Municipal Commission decided that the road leading to the Golf Club (later SICC) from Bukit Timah Road be known as Bukit Brown Road. (This road would later be expunged)

Recently, the Government built an underground MRT station known as Bukit Brown Station as part of the Circle Line which will in operation only when there is further development of the area.

During his half century of distinguished service in Singapore, he was once Asst Auditor General, Asst Colonial Secretary, and also VP of Singapore Philharmonic Society, Tan Tock Seng Hospital Secretary for 30 years.

The following lines were written at the Jubilee of 1887 and were found in MSS among the papers of Arthur Knight:

Empress and Queen, the star and ours

Are held aloft by kindred powers

For the same year that saw thy birth

Gave us a destiny on earth.

Thou shalt not lack our tribute praise,

Who reckon life by thine own days,

We who have prospered in thy smile

In this thy far off Birthday Isle.

Arthur himself was born on Christmas Day, 1833.

As for George Henry Brown, his legacy still lives in the hill and area he found to be pleasant and named as Mount Pleasant, which we know it as Brown’s Hill – Bukit Brown

Efforts are still being made to trace his connections with the illustrious David Brown’s family in Penang.

Compiled and written by Raymond Goh from the Newspapers archives, directories and also interview with his great great grand-daughter Jo Prudence who contacted us after reading about Bukit Brown in the Sunday Times, offering us a rare glimpse into the life of this man who became part of Singapore History.